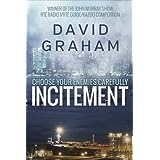 
To celebrate, I thought we should have a giveaway and thanks to Irish Author, David Graham, we have a personalised signed copy of his amazing thriller "Incitement" to send to one lucky reader.

We reviewed this novel late last year and have put a copy of the review under this post.  It's a perfect read for the chilly New Year evenings :)

Just leave a blog comment below or RT and follow @MargaretBMadden to enter this giveaway.  It's open Internationally.

Best of luck everyone!!!

This thriller set in the illegal narcotics trade sees DEA agent Diane Mesi investigating a war between two groups battling for supremacy . Michael Larsen is the ex-soldier and mercenary hired to drive this war in order to destroy both sides . Mesi suspects the violence is being dictated by a third party but finds it hard to get support from her agency and is running out of chances to prove her point . What is not clear to either is that both are being manipulated by  a higher force who has a different endgame in play and will stop at nothing to achieve this .

This is a fast-paced thriller with plenty of twists along the way . I found it well researched and for a debut novel is very assured . The novel moves easily from South America via Mexico to the United States and keeps the reader engaged along the way .It's a real page turner with good set-pieces along the way and a strong cast of characters . I could see this being turned into a movie and I have even tried to cast the main characters for a bit of fun .

I would highly recommend this novel and look forward to reading more in the future from the author .

David can be contacted via Twitter @DavidANGraham and also welcomes requests for review copies from Book Bloggers.
http://www.amazon.co.uk/Incitement-Graham-David/dp/1909483427/ref=sr_1_2?s=books&ie=UTF8&qid=1386803681&sr=1-2&keywords=incitement