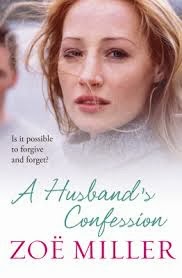 An enthralling story of two families and one life-changing secret
Today is publication day for the Irish Author, Zoe Miller and her new novel " A Husband's Confession ".   I'm hoping to be able to make it to the book launch, where I will pick up a copy to read and review. Watch this space!

A deserted laneway.
A hit and run accident.
Two families will never be the same . . .

Max and Ali Kennedy own a renowned artisan bakery in Dublin's creative quarter. Max has given Ali everything she ever wanted - marriage, children and security. Now, her biggest fear is that her precious family will be taken away from her.

Across the city, Finn and Jo Kennedy live a life of responsibility and success - far removed from the carefree couple they were when they first met in Australia twenty years ago. But in the best of marriages, appearances can be deceiving.
When a tragic accident befalls one of the families, a long-buried secret between the Kennedy brothers comes to the surface and a house of lies comes tumbling down.

As the couples discover life-changing truths about their marriages, each must make a decision - to forgive, to forget or to move on?

About the author
Zoe Miller was born in Dublin where she now lives with her husband. She began writing stories at an early age. Her writing career has also included freelance journalism and prize-winning short fiction. She has three children.
Her previous novels include The Compromise, A Family Scandal and Rival Passions.
www.zoemillerauthor.com  ·  @zoemillerauthor  ·  Facebook.com/zoemillerauthor