" Limoncello Yellow " by Traci Andrighetti. Review and interview with author. 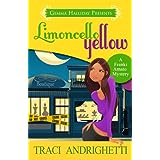 Thanks to Samantha March at ChickLitPlus.com for inviting me along on this Book Tour.......

Franki Amato is a PI working for her friend Veronica in the wonderful city of New Orleans.  Private Chicks Inc. has all kinds of clients.  Suspecting Spouses, missing dogs and a murder suspect hoping to clear their name.  All in a days work for the girls! Franki has left behind her life in Texas, her job on the police force, her cheating boyfriend and her overpowering Sicilian family who are dead set on finding her a nice husband.
A change of venue is just what she needs.  It also helps that she seems to have found a new handsome man, with a steady job and an interest in getting to know her more.  All is good, right?

This is one funny book - full of quirky characters, great location and laugh out loud moments throughout.  A great piece of light fun, perfect escapism at the end of a stressful day.  Franki's landlady, Glenda, is a scream with her crazy stripper outfits and penchant for men.  I love that to balance out Veronica's love of designer clothes and fast cars, Franki wears Forever 21 and eats junk food while lazing at home.  The investigation of the murder does not overtake the comic element and while I thought I had guessed the ending a few times, I was still surprised.  Great, fun read. Grab it for your next holiday.

1.  Having just finished Limoncello Yellow, I can safely say I loved the mixture of characters.  Did you base them on real people?

I did! The only one who is pure fiction is Glenda, but she was inspired by a crazy scene I witnessed at Big Daddy's strip club in New Orleans. One afternoon I was walking down Bourbon Street with friends, and I really needed a bathroom. So, I asked the bouncer at Big Daddy's if I could use the restroom. He let me in, and I discovered that the bathroom was actually just a toilet (out in the open!) in a corner of the strippers' dressing room. I was really embarrassed a) because all the girls were in various stages of undress and b) because I didn't want to go to the bathroom in front of them. But then another stripper came into the room with a huge bucket of fried chicken, and all of the girls attacked it like sharks at a feeding frenzy. While they were focused on the food, I seized upon that moment to go (obviously, I didn't sit on the seat). LOL.

2. Franki’s family seem keen for her to get married and settle down.  Is this a common thing with second generation Italians in the USA?

Oh yeah. Sometimes even in the third generation. Take me, for example. When I was in my late twenties, my dad and I went to visit one of his sisters in Toronto. She took us out to eat, and when my dad left the room for a moment to use the restroom, she turned to me, grabbed both my hands and burst into tears. I was totally freaked out because I had no idea what the hell was happening — until she started begging me to "get married before it's too late." So, that's what it's like. It's awesome (total sarcasm).

3. You chose the wild and wonderful city of New Orleans as the base of the book.  Is it really as eclectic as it seems?

I'm so glad you asked this question! Yes, it really IS that eclectic. In fact, I chose it over my hometown, the motto of which is "Keep Austin Weird." No other city in the U.S. comes close to New Orleans because of the peculiar mix of cultures that came together there. I mean, what other cities come to mind when I say pirates, plantations, voodoo, jazz, and Mardi Gras? None! Because the city is truly unique in the world. If you haven't been, I urge you to go.

4. Why did you choose your main character’s job as a PI rather than a regular detective?

Honestly, I didn't feel like I had enough knowledge of how the police work to make her a regular detective. Plus, I liked the idea of her free-styling the job, so to speak. It allows for more comedic possibilities. But, I'm going to the Writers Police Academy in September, so we'll see how Franki evolves.

5. Glenda is a larger than life addition to the novel.  She was hilarious. Will we encounter her again in the Franki Amato series?

Yes! I couldn't write these books without her. She's my comic relief. She's not quite as active in the second novel, Prosecco Pink. But in the third novel, which involves a murder at a strip club, she's instrumental to solving the case. I seriously can't wait to write that one!

6. Have you ever tried any of the bizarre voodoo potions that Franki encounters?

I'm embarrassed to admit it, but yes, I drank the Love Potion that Franki puts into Bradley's beer! Then I kind of freaked out about it. I told myself it was probably water, and it might have been because it didn't taste like anything. But still, I had that shadow of a doubt that there might be some cancer-causing chemical in it or, even worse, chicken blood or something gross like that. And by the way, the potion didn't work AT ALL, because a few days after I drank it, the guy I was interested in announced that he was seeing someone else. The jerk.

7. If the book was to be made into a movie, who would you see in the roles of Franki and Veronica?

I would probably choose Kristin Bell as Veronica. And Franki's hard because she's tall and, unlike Veronica, looks more stereotypically Italian-American. If she were taller, I would go with Mila Kunis. But since she's not, I'd probably pick Jennifer Lawrence.

8. Franki loves her food and Veronica loves her fashion.  Is there a bit of you in each of them or are they completely fictional?

Well, I certainly can't afford to dress like Veronica, but I do spend more money than I actually have on Italian leather handbags and shoes. I mean, a girl needs something to live for, right? As for Franki, there's a whole bunch of me in her, especially when it comes to food. All of the eating scenes were actually things I've done, like drinking way too much Limoncello and eating Nutella straight from the jar.

9. Who are your favourite authors at the moment?

10. Where is your favourite place to read?

In my bed, for sure. I try to find excuses to lie down whenever possible.