" The Closet Of Savage Mementos " by Nuala Ní Chonchúir 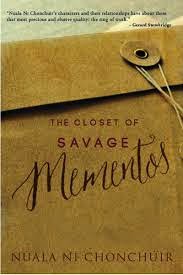 This novel, and its author, have been in the press a lot over the past few weeks.  A lot of hype surrounded the author's supposed dissing of female fiction or chick-lit and how she didn't care enough about shoes or handbags to actually read it.  While some people were upset about these comments, I am sure they were meant as a statement of fact, rather than a personal attack on other female writers.  I have invited Nuala down to Bleach House Library, for a chat with my bookclub, about her current novel and was determined to read it myself with an open mind and from the approach of a book lover, not a critic of her recent comments.

Lillis escapes the grey world of grief, and the ties that bind her in 1990s Dublin,  and heads to a small village in Scotland where she takes a live-in post as a waitress in a Country Inn.  Here she shakes off the memories and looks at life from a different perspective.  She finds love and friendship with her older boss and her days are filled with good food, wine and afternoons of making love.  However, when life throws her a couple of curve balls, a return to Dublin seems the only option.  Will returning home make things better or worse?  Will she forever run from her problems or learn to face them head on?

The novel is split into two sections; each twenty years apart.  Reading the first part is like being a fly on the wall of a family with nothing in common. Verity, Lillis's mother, is a car-crash character.  A failed mother and wife as well as an alcoholic, her children end up caring for her rather than the other way around.  An artist, with the temperament to match, she is brilliantly written and her bitterness hops off the page.  Robin, Lillis's brother is fearful of his future role in supervising his mother and wants to flee Dublin for the more tolerant world of San Francisco.  Himself and Lillis both need their own space but resist complete estrangement.
The second section fast forwards to current times and the author returns to Dublin and Lillis's new life.  The past is still interwoven and we get glimpses of how Lillis has ended up where she is and how she feels about it.  An unexpected package brings the narrative to its final furlong and answers some questions for both Lillis, and the reader.

Based, in part, on the author's life, this is a story of love, loss and change.  One minute Lillis is fiesty and determined, the next she is immature and needy.  Her journey is not one we have not heard of before, but the way it is written makes you feel that it is.  Nuala Ní Chonchúir writes with great flair, attention to detail and with melodic prose.  The descriptive passages, especially the ones in Scotland, are divine.  The interaction between Lillis and her difficult mother are intense and real.  I am sure there are many daughters out there who will recognise the pain felt when a parent slices through your heart with a nasty comment or look.  Reading the character of Struan, the older lover, the reader can see how a young girl could be attracted to such a man.  He lavishes attention at times and treats her like the adult she has become.  The backdrop of the Scottish landscape would most certainly help this feeling of awe that Lillis seems to have when around him.
On her return to Dublin, Lillis is in a dark place and the author uses her language skills to describe this mood:

" I was pulled tight between forgetting and remembering.  Any sense of myself as a competent human being, with things to do and achieve, had left me.  I was a rag doll, floppy and useless.  I signed on the dole and stayed in Verity's; I slept during the day, for hours and hours, and drifted through the weeks, doing little.  I unscrewed the mirror from the dressing table in my old bedroom and put it against the wall, so I wouldn't have to face myself.  Everything seemed pointless, even absurd.  Why should I shower every day? Why should I eat proper food? Why should I care about getting a job, or socialising, or about anything at all? I woke up each morning without myself, glum with the realisation that I had to get through another day."

This novel is written by a woman, with perfect observations on love, sex and family along with some of the expectations imposed on women.  However, it should not be limited to a specific genre.  It is part contemporary fiction, literary fiction and can also be placed in the bookshops under many guises; Irish Fiction, Female Author, Bookclub Selection.  If I had to choose a table to place it on, in bookshops throughout the country, I would choose Modern Classic.  It deserves the title for the beautiful prose and touching narrative, even if it is a new release.  Well done Nuala Ní Chonchúir. You have written 190 pages of perfection!

The Closet Of Savage Mementos is published by New Island Books and is available in paperback and e-book format.