" Closing In " by Sue Fortin. Book Tour Review and Giveaway 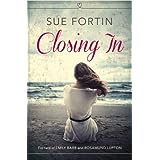 Helen has had to leave everything she’s ever known behind; her home, her family, even her own name.
Now, returning to the UK as Ellen Newman, she moves to a small coastal village, working as a nanny for Donovan, a criminal psychologist. Attractive, caring and protective, this single father and his sweet daughter are a world away from Ellen’s past. She thinks she’s escaped. She thinks she’s safe.
But something is wrong. Strange incidents begin to plague her new family, and their house of calm is about to become one of suspicion and fear. Who can be trusted? Who is the target? Who is closing in?


I am delighted to be part of Fiction Addiction's Book Tour for Sue Fortin's second novel, Closing In.  Very different to her debut novel, United States of Love, this is a fast paced page turner with plenty of twists and turns along the way.  Following the story of Helen, who is running from the past , the author brings us on a journey of new beginnings, new friendships and second chances.
Donovan is a strong character who, despite circumstances, gives Helen the stability she needs and makes her feel alive again.  The chemistry between them is great and I can certainly see why Helen would be attracted to him.

The writing is plain and simple with a nice pace, making it possible to read in one or two sittings.  It has a few subplots, with an ex-wife and one of Donovan's cases interwoven through the novel.  This adds to the suspense and intrigue.  A recommended read for fans of Dorothy Koomson and Nicci French.  Enter the rafflecopter giveaway below for your chance to win an e-copy of Closing In, an Amazon gift card and a cute tote bag....

The bag had been hidden at the back of the loft for several weeks now. Packed and ready to go. Helen checked the contents. The all-important papers were there. Deed poll, change of name. New bank account. New bank card. New passport. She ran her finger over the gold embossed coat of arms of the little red book before flicking through the green pages, pausing at the photograph. The face that had stared back at her all these years was the same; shoulder length blonde hair, hazel eyes and fair complexion but the name betrayed the picture. Helen Matthews was no more.
‘Hello, Ellen Newman.’ It was a whisper. Helen barely dared to say her new name out loud. The past twelve months had taught her caution at all times. She had been waiting for this opportunity for what seemed like forever; like a sleeper cell, her escape plan could finally be activated. Her hand shook at the thought of what lay ahead. A mixture of anticipation and fear. She took a moment to calm her breathing and bring the rush of adrenalin under control. She needed to keep a clear head and not panic. She had rehearsed this over and over again in her mind for several months. The anxiety passed, allowing the control to take its place. She closed the passport and stuffed it back into the holdall. ‘Come on, Ellen, let’s get you out of here.’

‘What do you mean, you don’t know where she is, Kate?’ He squeezed his mobile phone tightly, feeling the frustration rise but fought to keep it in check. ‘You’re her best friend. Surely she told you where she was going?’
‘Look, Toby, I honestly don’t know where she is.’
Toby didn’t miss the guarded note in Kate’s voice. She wasn’t going to tell him anything. He took a deep breath and forced a conciliatory tone. ‘I don’t even know why she took off. I got back from a weekend away clay pigeon shooting and found a note. I’m worried about her. That’s all. Please, Kate?’ Jesus, was he going to have to beg?
‘Okay,’ Kate relented. ‘If I hear from her, I’ll tell her to ring you or something.’
‘Thanks. I really appreciate it. I feel lost without her.’ Finishing the call he dropped his phone on to the sofa and picked up the note Helen had left.
Toby, by the time you read this, I will be gone. I am leaving you for good and not coming back. Things between us have become too bad. Please don’t try to find me. It’s over between us. Helen
P.S. Please remember to feed Scruffs. I’ve stocked the cupboard up with cat food so you don’t need to buy any more for at least a week.
He looked at Scruffs stretched out on the sofa next to him. Toby reached over and ran his fingers up and down the cat’s neck. He could feel all the tiny bones of its skeleton beneath the fur and skin. Scrawny little thing. Helen adored that cat and, yet, she had left it. This was all so out of character for her. Running out on him, on the cat, on their life together. It was the last thing he thought she would do. How had he not seen this coming and where in God’s name could she have gone? He was sure Kate knew. In fact, he’d stake his Square Mile bankers’ salary on it. Scooping the cat up, Toby continued to stroke the tortoiseshell fur as he walked over to the full length window. He stood looking out over the Islington skyline.
His finger and thumb massaged the back of the cat’s neck, before sliding all the way around, meeting under its chin.
‘You’re out there somewhere, Helen.’ He dropped Scruffs to the floor, ignoring the squeak of protest at the rather unceremonious dismissal. Toby pressed his forehead against the glass, the palms of his hands following suit. ‘I’m not letting you go without a fight, that’s for sure, sweetheart.’

Lover of cake, Dragonflies and France. Hater of calories, maths and snakes. Sue was born in Hertfordshire but had a nomadic childhood, moving often with her family, before eventually settling in West Sussex.
Sue is married with four children, all of whom patiently give her time to write but, when not behind the keyboard, she likes to spend her time with them, enjoying both the coast and the South Downs, between which they are nestled.
To find out more about Sue visit her blogs www.suefortin.wordpress.com  and www.theromaniacs.co.uk Twitter : suefortin1. Facebook : Sue Fortin Writer's Page

a Rafflecopter giveaway
Posted by bleachhouselibrary at 00:44