"The Decline and Fall of the Dukes of Leinster" by Terence Dooley. Blog Special-Part 1. Review. 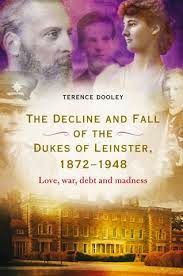 As some you may have noticed, I have been talking about this book for a while now and even posted a guest review of it last month.  However, I wanted to do my own review from a different angle.  My guest reviewer, Aidan Halpin, is a staunch reader of non-fiction and already a huge fan of Terence Dooley's work.  I, on the other hand, have read limited non-fiction and had never come across this author before.  Having returned to education, after a very long break (24 years), I have re-discovered my love of History and this title had a great sub-heading,   Love, war, debt and madness.  I love the tales of the "Big House" and as I have driven past this amazing country estate on many, many occasions, I was intrigued to read a little of its history.  Little did I appreciate how much I would sink into the story of the FitzGeralds and the story of Carton House, Co. Kildare.  Remember, I am writing this review from a non-academic approach and want to show how fact can be so much stranger than fiction.  You don't need to stick to the Historical Fiction part of your local bookstore or online retailer, some of these non-fiction titles are simply wonderful and give the real story of the real people........

This review is one of my most difficult, as I cannot express how much I loved the story and want to do this book the justice it deserves.  I will copy a little of the blurb to give you a brief backround.

This book tells the story of the decline and fall of Ireland's premier aristocratic family - the dukes of Leinster - who for almost 300 years, lived amidst glorious splendour in their grand Palladian mansion, Carton House, Co. Kildare.
The story moves from the little Irish town of Maynooth to London to continental Europe and America before returning to Carton.
Land War, Home Rule, the Great War, revolution, global economic collapse, sadness and madness.

This blurb is a little teaser of what the reader can expect and the book goes back to the origins of Carton House and through the generations of dukes who lived there.  The first few chapters are an in depth look at the creation of the mansion, the design of the thousands of acres, and formal gardens, and gives a glimpse at what the regular residents of the small country town in Co. Kildare really thought of their aristocratic neighbours.  We read about visits from Royalty, then installation of a railway, the battle for land rights, the opposition to Home Rule and the fears that this long established family may lose their foothold in the area with the threat of an Irish Republic.  I would recommend that you skim through these first two chapters to get to the guts of the story, and can guarantee that you will come back to these chapters on completion of the book, as there will be more meaning to the historical facts and figures.
Now, here is where it gets interesting......... 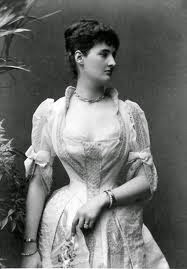 Chapter three is called "The marriage of Gerald and Lady Hermione Duncombe, 1884" and the facts that surround this marriage, and the subsequent decline of Carton House and it's residents, are where I got sucked in and could not put the book down!  Hermione was from a wealthy English family and was a teenager when she married Gerald.  He was older, of a quiet disposition and enjoyed spending time at home in Carton.  She was a social butterfly who had been spotted for her beauty at her coming out and was admired by many.  She was at first happy with the arrangement but after losing her first child just after birth, she began to show signs of depression.  She went on to have two sons with Gerald and all appeared well.  The depression became worse and she felt confined and restrained by her marriage and Terence Dooley has cleverly added some of her personal letters to friends to show her state of mind at the time.  She implies that Gerald was a control freak and a bully and she began to seek enlightenment outside the estate of Carton.  She met regularly with like-minded aristocrats and it seems extra-marital affairs were rife.  She became pregnant by her lover, Hugo (married, and a brother of her best friend) and Gerald knew the child was not his.  After a brief separation, they resumed married life and the child, another son, was never mentioned as being Hugo's.

Things went from bad to worse, as their eldest son, Maurice was discovered to suffer from epilepsy but in those days it was known as lunacy.  Their second son, Desmond, went off to war. The youngest, Edmond, was sent to live with relations.  Hermione became ill and died abroad, where she had traveled for the supposed benefit of the air.  The duchess died before she turned thirty.  Her husband, the duke, also passed away at a young age and now the three boys were orphaned.  The eldest, and heir apparent, was sent to a lunatic asylum in Scotland and received very few visitors.  The fact that he was there was hidden from the press and tales were leaked that he was holidaying abroad, on yachts etc. nothing could be further from the truth.
The second son, was killed in service and there was serious concerns about the remaining son's ability to carry his title and responsibility correctly. 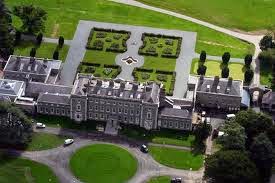 All through the book we are told of royal connections, details of wedding presents for the newly married couple, parties held in honour of coming of age birthdays, trips abroad to find suitable wives, lavish expenditure and the high life that eventually caught up of the FitzGeralds.  We also get to see how much money was spent all through these years.  Terence Dooley is, after all, a historian and the reader gets to read all the details that we would miss out on if it was fiction.  Personal letters are dotted through the main story and this really helps the reader to get into the minds of these people and even gain some sympathy for their plight.  It is astonishing how one family went through so much tragedy and heartbreak and I found myself wondering how different it would be "if only". There were too many things to blame for their decline and fall, it is impossible to pin-point it to one event.  I am still carrying their stories inside me and  amazed at how much this book has touched me.  I am so glad I decided to delve into the world of the dukes of Leinster and wish I could ramble on here for ever. However, I need to leave something for you to discover and am fairly certain that if you enjoy historical fiction, stories of The Big House or the likes of Downton Abbey, this book will knock your socks off.  Give it a chance. I think we will hear more of The FitzGerald family soon, either as a TV show or an amazing screenplay.

I will be posting my interview with Prof. Terence Dooley in part 2 of this blog special.  Please check back for more Carton related chat and to find out what he is working on right now.
Terence Dooley can be followed on Twitter at @TerenceDooley10 and his publishers @FourCourtsPress are available for any further inquiry.

The decline and fall of the dukes of Leinster 1872-1948 is published by Four Courts Press and is available as a paperback or ebook.  Please note that the binding of this book is of very high quality and contains many beautiful photos spanning the whole story.  A beautiful edition which is sure to become a collectors edition, as the author's previous works have.