"Brian and The Vikings" by Chris Judd & Mark Wickham - Review by Elise aged 5. 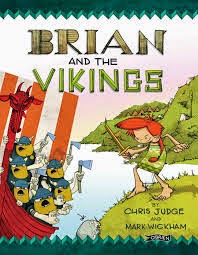 We received a copy of this book in return for an honest review.  Who better to review a kid's book, than a kid !  Here are Elise Roe's thoughts ( with some help from big sister, Jane ) :

This book is a about a small yet very smart boy called Brian Boru.  When he and his brothers are playing in the woods, he spots some vikings and comes up with a genius plan to get rid of them.  The adventures of Brian Boru, the small boy who legend tells, grew up to be The High King of Ireland

Elise thought this book was funny.  She thought it was good and, every couple of nights, asked for it to be read.  Her favourite character was Brian Boru and her favourite part was when the Vikings realised they were being tricked.

Elise says that she thinks boys and girls aged 4 an up should read this book.

Brian and The Vikings is published by O'Brien Press on 25th Aug and is available in paperback.