"The Tell-Tale Heart" by Jill Dawson 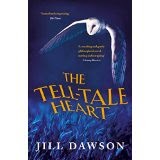 Patrick has had heart transplant surgery.  A fifty year old disgraced Professor, divorced and insular, he wakes up after the surgery and subtle changes become slowly apparent.  Obviously, the physical changes are there as the new organ tries to find it's place within its strange surroundings, but there are also more emotional changes. Memories, feelings and dreams that are unusual and surreal to Patrick.
When the transplant co-ordinator lets slip that the donor was a sixteen year old boy, it begins to make a bit more sense.  He know has emotions that he has never truly felt.  Compassion, love and basic understanding. Will he dismiss these new found feelings or revert to his dismissive, hard former self?

The story is told in four parts.  The donor's ancestors are part of the tale, linking Patrick's dreams to the past. The story of sixteen year old Drew and his love for an older woman and the events leading up to his death.  The reader is then brought back to Patrick and sees how he copes after major surgery and how his former life comes to the forefront of his current one.

This is my first time reading Jill Dawson and I had no pre-conceptions.  I knew from the first chapter that the writer is one of high caliber and deserved her many awards from the literary world.  The characters were well drawn and deeply emotive.  Their inner thoughts were intense and honest and showed their true nature. Patrick reminded me of people I have encountered over the years and were so narcissistic that I often wondered how they slept at night.  It seems entirely possible that the only thing that would shake someone like this is a life threatening surgery.  But will it change them enough that they feel the organ is being used to its best potential?
Drew, the donor, had a short life but reading his narrative made the book come alive.  So achingly real, his emotions were beautifully described and gave the novel the bite that it needed after a slow start.  His ancestors story was informative and like Drew's love for his forbidden love, the 1800s forbidden love was injected with sexual tension, longing and desire.  The history of the Fenland are in England was not really of interest to me but the stories of the people were.


This short novel would not be to everyone's taste, but if you are fan of detailed prose and literary genre, I think this one is for you......