" If I Should Die " by Matthew Frank 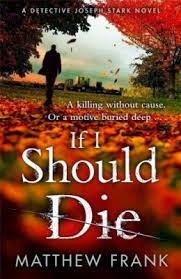 We received a copy of this book from Penguin Books in return for an honest review...

“If I Should Die" is an accomplished debut novel by Matthew Frank . It introduces the character of Joseph Stark , now a Trainee Detective but recently injured on active duty as a Territorial Army soldier in Afghanistan .

The story revolves around a recent spate of apparently random attacks on the homeless  and down-and-outs in South London . Recent recruit Trainee Detective Joseph Stark is assigned to the team investigating these events as part of his training . As well as dealing with his new career ,Stark is also recovering from the physical and mental injuries suffered during an attack whilst on patrol in Afghanistan,an attack which left some of his comrades dead . When one of the victims in South London dies the investigation is upgraded to murder ,Stark begins to struggle with the work load as it becomes clear that there are more issues than random attacks on the homeless . The fall out from the ambush in Afghanistan is also constantly on his mind and the army Captain assigned to investigate Stark is pushing hard for answers .

This British crime novel is well paced and typical of its location . Slightly less frenetic than it’s American counterpart it nevertheless rattles along at a good pace and the main character Stark is well presented . There is scope for this character to develop in a similar manner to the DI Thorne character of Mark Billingham and I look forward to the follow up by this talented writer .