" The Rosie Effect " by Graeme Simpsion 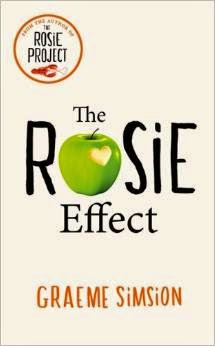 I received a copy of this title from NetGalley.com in return for an honest review.

If anyone asks me to recommend a book to them, my go-to title is usually The Rosie Project by Graeme Simpsion.  A massive international best seller that deserves to be on everyone's bookshelf, male of female.  This is the follow up and, once again, follows Prof. Don Tillman on his characteristically madcap approach to life.

Don and Rosie have moved to New York.  Don is working at a University, Rosie is still a student and they both continue to shake up a few cocktails in a downtown bar.  There is one big change in their lives though.  Rosie is pregnant.  This is the humourous look at what happens to Don's regulated daily routine as a result of this news and how Rosie sees the future with Don as a parent.
We also see the return of some familiar characters which helped make the first book a huge success.

I have been so eager to read the next installment of Don's saga, and starting this book was like a child finding their long-lost blanket.  Within three pages I was hooked back into Don's special way of thinking and could't wait to see how he would cope with the whole pregnancy issue.
Gene is also back but his character is no longer funny or quirky, just a man who appears to be aging.  Rosie is absent for a lot of the book and even when she is on the pages, she is not very likable.  A new neighbour, George, lends a bit of newness to the narrative but not enough to make him special.  Dave and his wife, Sonia, also appear to help Don through some confusing times.

Don is still amazing.  A truly wonderful protagonist and an unlikely hero.  I missed him so much after finishing The Rosie Project and thought the new book would never come.  Unfortunately, this novel is not as good as the first, but anything that contains Don will still be on my wishlist.  I would advise that if you have not read The Rosie Project, go and get it straight away.  But maybe there is no need to rush out and buy its sequel.  Savour the first installment for a little while, then if you miss Don as much as I did, grab this new book and visit him again.  Just don't expect the rest of the characters to move you....