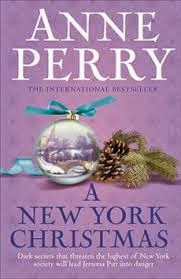 The year is 1904 and Jemima Pitt is heading off to New York as a companion to Delphinia, a young bride-to-be.  As Phinnie has no mother figure, Jemima wants to make sure she is well settled into the role of wife to a wealthy young American.  The Albright family have it all, house, money and a place in the top of New York society.  But all is not what it seems and Jemima is dragged into the drama, not long after her arrival.

This is the first book by Anne Perry that I have read,  She has written far too many to mention, including The Inspector Pitt Series (I presume that Jemima is his daughter), World War I Series and a host of Christmas Novellas.  The cover had me expecting something relating to Christmas, even the title promised it, and the artwork was very pretty.  However, that was the only festive thing about it.  Snow on the ground, yes.  Nothing else.  A weak link at best.
The story was bizarre and had weak characters.  The historical part of the historical fiction was wasted.  Instead, there was endless rambling dialogue from annoying people.  The murder, which happens at the beginning of the book, seems almost like an inconvenience  rather than a tragic event.
A most un-enjoyable story, along the lines of Murder She Wrote and Miss Marple.  Maybe suitable for a bed ridden elderly aunt, possibly one who is asleep or in a coma....