"Coming Home To You" by Liesel Schmidt 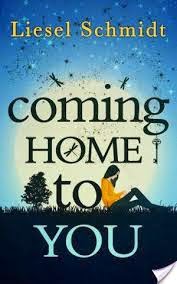 Thanks to netgalley.com and CarinaUK for the review copy of this title...

When you find the man of your dreams in your early twenties, you are one of the lucky ones.  A whole life ahead of you.  Getting married, buying your first home, having children and basically doing everything as a couple.  No more nights alone on the sofa or heading to the movies on your own.  An end to the dreaded match-making efforts of well intentioned friends and colleagues.
For Zoe, she was lucky enough to meet her ideal mate, Paul.  But his sudden death means she is facing the world alone again.  A year later,  she decides to move out of their apartment and begin to live again.  With her best friend Kate by her side, she takes the tentative steps on this forward journey.  This includes house sitting for a posted Marine,  and as she pours her heart out to him by journal and email, the whole experience strengthens her wounded heart.


The concept of this debut novel was wonderful.  I have read quite a few books featuring the younger, recently bereaved, protagonist.  The conversing by email and keeping of a journal appealed to me as it sounded like the kind of thing I would do.  The idea had similarities to Holly Martin's wonderful novel, The Guestbook.  That was the only similarity though.

The grieving process is glossed over as the reader is brought into the story around the one year anniversary of Pauls death.  She has been alone all this time and now, all of a sudden, she is reunited with her best friend, becomes very close with the local coffee shop owner and is moving house and quitting her job.  The dating scene brings out Zoe's personality and, I have to say, I didn't like it.  She was very judgmental about her date.  Too good looking, clothes too expensive, the restaurant was too flashy and she didn't understand the menu.  She runs to hide in the ladies room before even getting to talk to him that much, considers abandoning him because she thinks he is too sure of himself. (He told her he graduated first in his class in Med School -That's a problem, why??). I actually felt sorry for the man who was stuck with a dinner guest who is content to eat salad rather than ask what the items on the menu are in English.   Maybe the fact that she is 25 and he is 35 shows how maturity should always be considered when choosing a potential partner.

Then there is the fact that she stumbles across a property for sale and feels fate has picked it for her.  Of course, the owner not only gives it to her for the paltry sum of $250 but then offers to do it up for her too, as it he is a contractor.  She picks one of the worlds most bizarre business ideas for her new shop and yet never seems to work in it.

There was also a cringe worthy encounter with an Italian carpet fitter where the author used every cliche in the book to describe the poor man.  Slagging off his Mama and her cooking is not my idea of comedy.

I really wanted to like this book.  The idea was very clever, but the bringing together of the concept just didn't work for me.  It could be my age.  I am not put off by a well educated and well dressed man who tries to impress dates by taking them to the best restaurant in town.  I would not ask a man, away from home, serving his country "Where are your parents? Are they alive? Do they stay in contact with you?".  Zoe was annoying, needy and clingy.  More like a teenager than a girl in her mid-twenties.  Again, this could be my perspective, from a woman in her early forties.  Hopefully the authors next book will show a more level headed lead character, or at least a bit more realism.

I would say this title is more suited to the New Adult market and may appeal more to this age bracket.

Coming Home To You is published by Carina and is available as an ebook.