"Each and Every One" by Rachael English 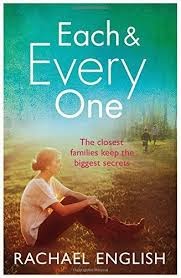 I received a copy of this from netgalley.com

The Shine family have lived a comfortable life.  A lovely home on leafy Dublin street, family holidays and property abroad, private education for their children. All this was handed to them on a plate, via the hard work of Gus and Joan, their hard working parents.  But all this is about to change. Gus announces that his money has run out and breaks the news that his children must now stand on their own feet, supporting themselves and their own families, for the first time in their lives.  Tara, Vee, Niall and Damien are shocked with the news and, except for Tara, struggle with their new cut-backs.  This story delves into the lives of the four adult Shine children and how they deal with change.

I loved Rachael's first novel, Going Back, so was delighted to get my hands on a review copy of this second novel from the Irish writer and presenter.
This book is very different to the first.  The characters are more serious, the narrative is not as fun and the characters are, for the most, irritating.  The end of the Celtic tiger years is a feature of a lot of Irish fiction at the moment.   The boom/bust stories are frequent and seem to imply that we were a greedy nation, pouring money down the drain and deserve the crisp awakening of these 'lessons learned'.  I had hopes that this book would be different.  The Shine family, however, were a stereotypical, self made dynasty, who showered their children with luxuries and continued to do so, even after they grew up and moved on with their own lives.  Did Gus and Joan really believe that encouraging their thirty-something son to go on an endless 'Gap-Year', or paying their daughters mortgage and her kids school fees, while allowing her to shop endlessly and expensively, was helping mold their personalities?  Their wannabe politician son, Damien, is a hypocrite, with socialist ideals but children who attend expensive, private schools (also paid by Daddy Shine).  Even the token, grounded daughter, Tara, who has a real job and a bit of ambition, is withdrawing funds from the family piggy bank.  She lives in the basement of her parents large home in an affluent neighbourhood and supports herself and layabout boyfriend.  When I say support, I mean, she buys food and beer.  No rent is payed and the bills seem to be paid by her parents also.
When the siblings hold a meeting, to discuss their new hardship, I found it impossible to connect with any of them.  I had hopes for Tara, though.  She is a journalist who has seen the other side of the coin and has even befriended a family from a very difficult social background to the one she is used to. But, even Tara shows her true colours.  When she discovers something related to her parents financial difficulty, she storms off in a child-like temper and the reader is told of her new lodgings being in a terrible bedsit in Ballsbridge.  For those readers who know Dublin, Ballsbridge is a very affluent area, and even the smallest bedsits could set you back more than a lovely 2/3 bed home in lesser areas.  My sympathies were not with Tara, or indeed any of the Shines.
My sympathies were, however, with Carmel, a worn down grandmother from a rough area of Dublin, who struggles on a daily basis to protect her two young grandkids from the harsh reality of their situation.  Tara has a good heart and befriends this family, and I kept wishing that some of Carmels genuine compassion would rub off on the young journalist.

I was a little disappointed in this novel, but maybe that is because I am overdosed on works of fiction telling me that Irish people are much better off since the recession hit.  Being told that we are now more genuine, more caring and compassionate.  I would like to think that some of us have indeed improved our attitudes, but the family in this book screamed of Capitalism, snobbery and self pity.  I would love to have heard more of the day to day realities of Carmel and her situation.  This book is the story of a family.  Just not a very nice one.  Just the wrong one.

Rachael English is a talented writer and storyteller.  Her style  is easy to read, flows along nicely and has a lovely warm tone.  I am a fan, just not of this fictional family.  I hope her next novel comes soon and returns to the relaxed form of Going Back.

Each and Every One is published by Orion and is available in paperback and ebook format.