"A Meditation On Murder" by Robert Thorogood. Guest review from Celeste McCreesh 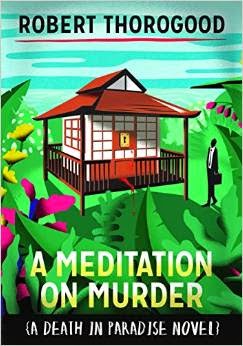 We received an ARC of this title from the publishers, in return for an honest review...

This story opens on one of the most unspoilt Islands of the Caribbean, Saint-Marie where we meet Aslan Kennedy who is a yoga instructor and self styles Spiritual Guru and owns his own hotel "The Retreat" along with his wife Rianka.  One particular morning, he gets up and goes down to make green tea to bring to the Meditation Space, which he does as normal on a daily basis.  He sees the five guests that are staying in the hotel on the beach and calls out to them to get their attention. It was an hour and a half later that the screaming started and he's been murdered.

We are then introduced to the detectives that are assigned  on the case, Detective Inspector Richard Poole and Detective Sergeant Camille Bordey.  It seems to be an open and shut case as there were five other people who were inside a locked room where Aslan was killed and one of them has already confessed to the murder but are they the murderer?  DI Poole is even convinced that the person whom has confessed to the murder is the one person who couldn't have done it.  Are they covering for someone else?  Is there more to this murder than meets the eye?  As the Detectives delve deeper into the victim and all the suspects pasts and history the truth starts to emerge and  a web of lies seem to be untangled.  DI Poole is adamant that no stone will be left unturned to track down the real killer.

I really enjoyed this book, however I felt that the story did dip a little bit in the middle but once it picked up the pace again I couldn't put it down.  I loved the descriptions of the sandy beaches and the surrounding scenery on the island and I wished that I was there with the heat on my face and looking out and walking on the white sandy beaches instead of looking out at the gloomy weather we've been having here in Ireland.  I thought I'd a fair idea of who the killer was but didn't work out who it was until the very end but I had suspected about three characters throughout the story.  It is the first book I've read by the author Robert Thorogood & I would definitely read more of his work.   I only realised that this book is based on the Death in Paradise TV Series.  If you're looking for a good classic crime or murder/mystery then I would recommend that you curl up on the couch and sink into this clever whodunit story.

Although this hasn't been published yet, to be honest I didn't particularly like the cover at all, it's not a cover that's intriguing or would make me want to pick it up and read it. Other than the fact that I now know who the author is and what he's done,( i.e. been the creator of the hit BBC1 TV series Death in Paradise), I'd walk past it in a bookshop and it would be a case of judging a book by it's cover on this occasion.

Thank you to Harlequin (UK) Ltd via Margaret Madden for allowing me to read and review an ARC of this book. This book will available on Kindle and in all good bookstores and will be published on the 2nd January 2015.