"If You Were Me" by Sheila O'Flanagan. Guest review & Giveaway! 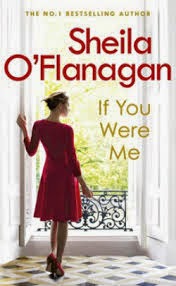 Thanks to Bookbridgr.com for sending the review and giveaway copies... Enter via Rafflecopter link below. This is a hardback 1st edition of this title!! Open INT.


You're engaged to a good-looking, successful man who adores you. You're on a countdown to the wedding day. Your family and friends are delighted, and excited.
You've long ago stopped thinking about your first love. The boy you never kissed. Even though he stole you heart and disappeared. You've grown up since then. You've put the past behind you. Love is more than a racing pulse and reckless passion.
But what happens if, even for a moment, that's what you feel?
Carlotta O'Keefe is about to - and soon she'll be facing the biggest decision of her life.

This is the first novel by Sheila O'Flanagan that I have read and I found it a light-hearted, enjoyable read. It is a real "what if" book which I'm sure the majority of women can identify with. What if I'd kissed that boy all those years ago? What if we hadn't lost touch? No matter how successful and happy a person is, everybody has a "what if?" I really connected with this book as it made me think of my own what ifs and remember things I had thought long forgotten.

I really enjoyed the descriptions of the different locations throughout the book especially the Spanish locations. At points I could almost imagine myself in Seville sipping sangria and eating tapas. The Spanish influence is felt throughout the book with each chapter title being a song title in Spanish. I didn't go so far as searching for these songs but I think it's a great idea to supply a soundtrack and if I ever reread this book I will be playing them to see how (and if) they compliment the story.

I found the characters realistic in that they were all flawed to some extent. Carlotta in particular I wanted to kick at multiple points as I found her incredibly irritating with her indecisiveness. I found it a bit incongruous that a very successful woman would dither so much. At the same time, this did make her more lifelike which is a good thing so even though I didn't like the main character, the characters are well represented. Also, who doesn't like a character like Luke - handsome, kind, generous with a hint of bad boy mystery!

If You Were Me is a well-written and enjoyable novel. It is quite predictable but there are enough little complications and twists to keep it interesting and the characters are well portrayed... I think my favourite is Chris's mother with her snide comments. I'd recommend this to anybody who wants a light read on a rainy Sunday curled up by the fireplace.
My rating:3.5/5

If You Were Me is published by Headline Review and is available in Hardback and ebook format.