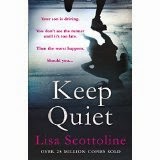 Thanks to Headline and Bookbridgr.com for the review copy of this title...

Ryan is almost old enough to get his drivers licence and has been taking lessons for months.  Jake thinks that he can gain some credibility with his son by letting Ryan drive on a quiet country road, late one evening.  This one error of judgment leads to the death of a young girl out for a jog.  A split second decision is called for, leaving Jake and Ryan riddled with guilt.  Can they get away with it?  Can they live with their decision for the rest of their lives?  Why is a stranger approaching Jake at a school basket ball game?  Is covering up a secret like this really worth the pain it causes?

This is a book of choices.  Firstly, would you flee the scene of a hit-and-run? Would you put the future of your child ahead of homicide? Could you live with your choice forever? Could you hide your distraught state from those who love you?  Secondly, how far would you go to keep this secret?  Who or what would you sacrifice to ensure the secret never escapes?

All these questions are asked early on in this thriller.  The accident causes a ripple effect and someone is going to have to pay.  The start of this novel had me turning the pages at a frantic pace and I was settling in for a one-sitting book.  However, something went wrong.  Maybe it's because it is set in USA and a lot of the slang, terminology and high school references were beginning to tire me.  There was also a lot of financial and legal aspects to the book which, frankly, bored me.  I think the premise was fantastic, a father prepared to do anything to protect his son, but it just fell flat after the first few chapters.  Ryan, the son, is a bit too sweet-as-candy and Pam, the legal eagle mother is seriously annoying.  Jake is in dire need of a holiday from his wife and child, if you ask me, and the combination of the three together was a bit head-wrecking.  A pair of police detectives are introduced halfway through the story, and they are infuriatingly weak characters.  The last chapter is over done and the epilogue was not needed at all.

I think this could have been so much better.  It was trying to be a Lee Child or David Baldacci type book, but fell short due to character flaws and a story which tried to be too clever.  Had it been stripped back to basics, it could have been great.

A quick read, suited for a holiday in the sun, with not too much attention required.