'The Girl On The Train' by Paula Hawkins 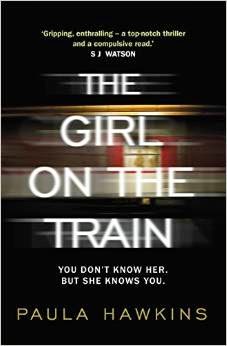 I received a review edition of this title via Netgalley.com...

Rachel is on a downward spiral.  Her marriage has broken down, she has lost her job and her drinking is more than a small problem.   Taking the commuter train to London, at peak times, each working day, she watches the world go by, rather than confronting it.  As she observes the same people, in the same houses, each day, she begins to form a picture of them in her mind.  Their names, their jobs and their routines.  The fog of alcohol helps bring these people to life, for her, and when she hears that a young woman, that she he has been watching, has disappeared without trace, the reality of what she has witnessed hits her with a bang.  The only thing is, with a reputation as a drunk, prone to mental breakdown, will anyone believe her?

This debut novel is creating a lot of discussion at the moment, although not released until Jan, the reviewers have given it a resounding thumbs up.  I agree.
An addictive read from page one, Rachel is a character that demands attention.  Her descent to her current level is drip fed to the reader and the pity, shame and despair that she feels is palatable.  She is a victim of circumstance and there but for the Grace of God go I...

The unsuspecting 'actors' in her real life play are only seen for a few minutes each day, but she feels a connection to them, makes them part of her journey and her routine.  The past is interlinked with this street and the alcohol keeps her connected more than she could be.  Prone to blackouts after some of her drinking sessions, Rachel struggles to piece together the weak parts of her memory that may contain information about Megan, the missing girl, and the night she disappeared.  Did she witness something or is all related to her depressed and drunk state?

The standard of this novel is high. Way high.  Much stronger than Gone Girl, paced at break neck speed, hidden stories and twist and turns throughout.  For fans of Into The Darkest Corner and Before I Go To Sleep, it is a superb psychological thriller, with hints of classic black and white Hitchcock movies throughout.  A perfect way to escape reality, and may make you look at your fellow commuters in a new light.  Sure to be a massive bestseller!

The Girl On The Train is published by Doubleday on 15th Jan 2015 and will also be available in ebook format.