Thanks to Brandon/O'Brien Press for the giveaway copy of this title...

I was blown away by this novel, when asked to review for Dundalk FM.  An amazing author, from Northern Ireland, Sam Millar is definitely one to check out! 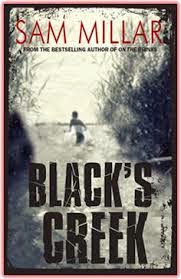 To enter the giveaway for a copy of Black's Creek, just enter via rafflecopter link below

a Rafflecopter giveaway
Posted by bleachhouselibrary at 07:25