'Going Back' by Rachael English. Review, giveaway & back to the 80s feature. 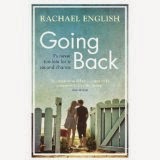 Thanks to the author, I have a signed copy of 'Going Back' for one lucky follower - Just enter via rafflecopter link at the bottom of the page...

When I was reading this novel, for review, I was thrown back to 1988 and all the gaudiness that made it memorable.  This prompted me to post photos of my 1980's BIG hair and soon there were plenty of tweets with #1988 memories.  I was 16 years old and music and fashion were my life.  I became a mother soon after this, so my memories jump from this final year of innocence to one of completye shock and shift of mindset.   This book features an older age group, but the music, style etc remain the same.  I asked Rachael English to tell me of her 1980s memories.

She closed her eyes as tightly as possible, so tight that the blackness faded to a caramel brown, the way it had done when she was a schoolgirl and the class were told to put their heads on the desk and go to sleep. She pretended she was on her own. Music spilled in from one of the other apartments: Tracy Chapman, ‘Fast Car’. She must have heard it a thousand times that summer.

Not that long ago, I sent a hundred dollars to Stephen Sondheim. Not, I suspect, that one of the world’s most accomplished composers is in urgent need of money; it was payment for permission to use lyrics from one of his songs in a book. Anyway, it got me thinking about music and songs and about the role they can play in books, especially when it comes to their power to bring you back to a certain time and place.
My book, Going Back, is a story in two parts: the first half is set in Boston in 1988, the second in present-day Dublin and Boston. For the early chapters I needed to evoke what it was like to be young and Irish in America at the end of the 1980s. I was helped by the fact that I actually did spend the summer of 1988 in Boston, so, to begin with, I wrote a list of all the things I remembered about those months.
The big stuff was easy; in no time at all, I’d scribbled down pages of notes about my job, about the jobs the others in the apartment had, and about our general sense of wonder at actually being in America. What surprised me, though, was how many small details were lurking at the back of my head.
I remembered going to see films like Who Framed Roger Rabbit and A Fish Called Wanda. I remembered buying white leggings and a denim shirt in a discount clothes shop (this was the 1980s!), but most of all I remembered songs, lots of songs. ‘Sweet Child O’Mine’ by Guns and Roses was on the radio all day every day. Every apartment on our street must have had a copy of Tracy Chapman’s first album because its songs were constantly wafting in. And we owned a paltry collection of cassettes, one of which was Fleetwood Mac’s ‘Tango in the Night’.
I tracked down all of these and played them. And played them. And played them a bit more. Each time I listened, more memories were triggered. I also found it easier to visualise the book’s main characters, Elizabeth and Danny. I saw him as a rock music obsessive, a bit of a musical snob whereas she was more of a Fleetwood Mac fan. I even gave her a favourite song: ‘Seven Wonders’.
Oh, and there was another benefit to all of this musical nostalgia. Where better to get a reminder of the era’s fashions than in the thousands of videos on YouTube? If you don’t remember the clothes and the big big hair of of the late eighties, I recommend going online and finding the video for the Bruce Springsteen song, ‘Tougher Than The Rest’ From the stone-washed jeans to the teeny-tiny lycra miniskirts every crime against fashion is there, and that’s how I picture Elizabeth and Danny.

My Review of Going Back

The year is 1988 and like many Irish students, Elizabeth is on a J1 visa in America. Crammed into a wreck of an apartment with some college friends, life in Boston is haze of hot summer days and nights of sneaking into bars with no ID. Elizabeth has left her boyfriend back in Ireland and plans to return to normal life as soon as her visa expires. Her plans become askew when she falls for local boy, Danny, and embarks on an intense summer romance. She spends almost every minute with him and it becomes apparent that they are soul mates. But can love be enough when your future is based on the other side of The Atlantic?
Flash forward twenty years, and we see Elizabeth as a mother of two, marriage crumbling and watching her eldest head off for a summer in Boston. Memories come flooding back and when her daughter needs her to follow her to America, Elizabeth comes face to face with her past.
From the first chapter, I was plunged back to 1988 and the memories of big hair, great music and carefree times. Chatting on Twitter, it seems to be a memorable year for many of us readers and we had some great fun with the hashtag #1988. Fleetwood Mac, home perms and Madonna look-a-likes were the common thread! Although I did not visit The United States til the early 1990s, reading about Elizabeth's experiences made me feel like I was right there beside her. The excitement of getting news from home, football and hurling results, newspaper clippings and rushed phone calls from a payphone on the street. The amazement that she felt at how quickly a landline could be installed in Boston, in comparison to the agonising wait in rural Ireland for such luxury, was spot on. Swapping clothes with your friends, having a few beers on the roof while you coat yourself with suntan oil and spending all available cash on a night out. Who hasn't done this?
Twenty years on, Elizabeth is married with kids but still recalls that summer. Here come the 'What if' questions and a recap of her first love. What happened to Danny? Why did things end up the way they did? Not an unusual premise for a novel, but Rachael English has so engaged us with her characters, that we really want to know the outcome.
I might be a tad biased, as I am a real 80s chick and adore books based in this period. However, I think this book is a clever look at youth, regardless of the time frame. Elizabeth was so sure that her life was all mapped out and was unlikely to veer off course. At twenty years of age, throw a handsome Italian-American into the mix, along with the amazing Boston backdrop and you have a recipe for getting a bit lost along the way. The story did lose a bit of its zest towards the end, but is that not the case with real life too?
Thanks to the author, I have dusted down some 12" picture discs, rooted out the photo albums and find myself craving prawn cocktail and vol-au-vents while sipping Ritz. All hail the 1980s.......

Going Back is published by Orion and is available in paperback and ebook format.  Rachael's second novel, Each and Everyone is also available...

a Rafflecopter giveaway
Posted by bleachhouselibrary at 05:24