Thanks to the author, I have a copy of Summer Triangle to giveaway to one lucky follower.  I am currently reading this novel, and am really enjoying the different locations and diverse characters.  It's a wonderful written book and I don't think you'll be disappointed.  To enter, just click on the rafflecopter link at the bottom of the post... 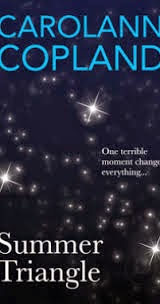 Shona and Majid are living different, but ordinary, lives on opposite sides of the globe, when both their worlds are
shattered.
Majid, who witnesses the death of his fiancé, a bomb victim at an Irish/Saudi festival, is so distraught he runs from his problems – right into the arms of Islamic fundamentalists. Together his new allies and he plot to show Ireland exactly what they think of its cooperation in the US war against terror, but will Majid really get the closure he so desperately craves?
Meanwhile Irish teen Shona falls pregnant following a drunken party and stumbles through early motherhood in a haze of alcohol. An overheard conversation about her past leaves her wallowing in the self-pity of betrayal and ripe for falling into the wrong hands.
When 08/08 threatens to become Dublin’s very own 9/11 will a chance meeting of the two teenagers hasten their road to self-destruction or help them to rise from the ashes of the past?
Particularly when there are dark forces at work…

I was also lucky enough to get a preview of Carolann's latest novel's details and look forward to its release in March!

DOMINOES (no image available, just yet)
Rory Mc Gee has spent two years setting up the dominoes of his life’s path anew, but one push of the first domino and his recently ordered world topples out of his control. As he watches everything fall around him, his only consolation is that the last domino to drop will expose the politician, who Rory knows murdered his former girlfriend Maria Dooley, eighteen years ago... before the man had swapped the sword for the pen.
Rory’s quest for the truth brings on the collapse of his life and that of his family and friends, and manages to drag Maria’s daughter Shona Moran through the mire with him. It doesn’t matter what goes down as long as the murderer falls too.
Ex IRA activist and present day politician, Fergal O’ Gorman, is exposed on live television during elections, causing a media frenzy. Rory is able to set his demons to rest and overcomes the guilt he has felt about Maria’s death, in this story of buried love and exhumed hatred; where revenge is achieved... but at such a cost.

Summer Triangle is published by Emu Ink and is available in paperback and ebook format (Kindle version is on £2.20, at time of posting).  Giveaway open INT. Good Luck!

a Rafflecopter giveaway
Posted by bleachhouselibrary at 11:38