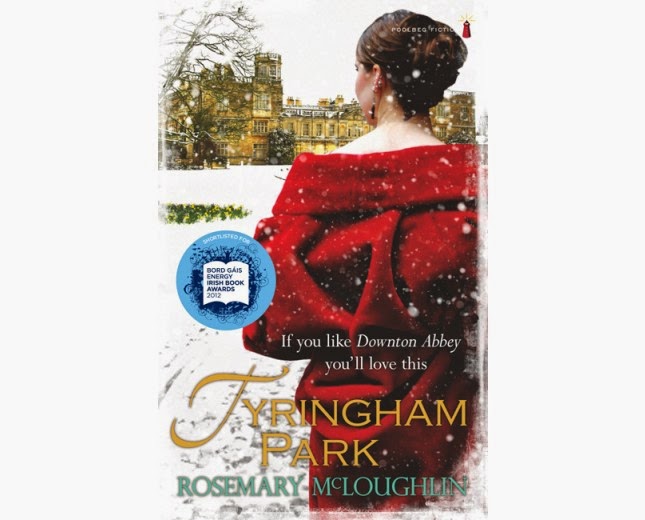 A country estate in Ireland, Tyringham Park is the home to Blackshaw family.  The disappearance of baby Victoria, has left an empty space in the hearts and minds of many.  Sister Charlotte is haunted by her memory, while mother, Edwina is sure that a missing staff member is the key to the missing child.  The dark shadows of Tyringham Park hide the chilly atmosphere of the house and its residents.
A tale of clear division between landed gentry and their staff, secrets and lies and the need to keep up appearances, against all odds...

I was a late comer to this novel.  Published in 2012, it was a bestseller, here in Ireland and was shortlisted for the Bord Gais Energy Irish Book Awards.  The past six or seven years has seen a surge in historical fiction, based in grand country homes, and we can thank Downton Abbey for this.  However, this novel is set in Ireland, just after the War of Independence, and the Lord of this Estate is a British army man with no interest in the Irish Estate, preferring to spend his time in London.    This leaves Tyringham Park, and Lady Blackshaw, to its own devices.  A harsh woman, she has no interest in either the house or her children.  She is obsessed with her horses and cares more for their ability to hunt well than anything else in her life.  When Charlotte, her daughter, shows promise as a rider, Lady Blackshaw is horrified.  Jealousy consumes her, and leads to disaster.
All through the book, we get a glimpse of servant life, mostly through the nanny and housekeeper.  Nurse Dixon is the evil element and we get to follow her story, along with other staff members.

This was a funny read.  I wasn't really sure how I was feeling as I was reading.  Amused, baffled, curious and, quiet simply, hooked....
By rights, I shouldn't have liked this.  It is over the top, unrealistic and full of bizarre characters that seem almost theatrical.   But I devoured it in two sittings. It was addictive.  A bit like Downton Abbey, it has that guilty pleasure thing going for it.  I am actually really looking forward to the sequel, Return to Tyringham Park, which is due out in March.  Now, pass me that bell, so I can ring for my maid.....

Tyringham Park is published by Poolbeg and is available in paperback and ebook format.
http://www.poolbeg.com/tyringham-park-rosemary-mcloughlin.html

The sequel, Return to Tyringham Park will be published on
Posted by bleachhouselibrary at 06:22