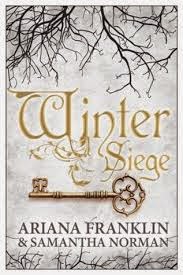 Ariana Franklin, author of the Mistress of the Art of Death Series, passed away in 2011  before completing her latest work. Her daughter Samantha Norman completed her mother's manuscript work to produce her mother's fifth book, Winter Siege.

Set in 12th century England this story brings together the lives of two very different heroes - a Norman mercenary named Gwil and a young girl from the fens of Cambridgeshire who was suffered a terrible ordeal. Their story unfolds in a war torn England, divided by the battle for the throne between the Norman Empress Mathilde and reigning King Stephen.

Gwil rescues the girl and reluctantly takes her under his wing. The relationship between this odd pair slowly grows and Gwil does everything he can to protect the girl from dangers she is facing from the perpetrators of her horrific attack, and from the terror within her. Gwil has suffered his own tragedy and is far from perfect, which are traits I love in a hero. The book reminded me of the work of the late David Gemmell who was a master of the flawed hero.

This was my first time to read anything by Franklin so I had no expectations.  I was unsure of the intermittent sections where the ailing Abbott is narrating the story to a young scribe, but I was eager to keep reading to discover
the fate of our unlikely pair. There are plenty of other strong characters including the evil monk Thancmar and Lady Maud of Kenniford. This was an enjoyable and compelling read and I am keen to read the other books by Franklin too.


Winter Siege is published by Bantam Press and is available in paperback and ebook format.