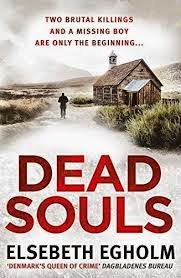 THE BLURB
On All Hallows' Eve, ex-convict Peter Boutrup is visiting his best friend's grave when her estranged mother appears. Her son, Magnus, has disappeared, and she begs Peter to look for him.
The next day a young nun is pulled out of the moat at the convent in Djursland. She has been garrotted and Peter, who works there as a carpenter, was the last person to see her alive. Meanwhile, diver Kir Røjel finds an old box resting on the seabed. Inside are human bones. They are sixty years old, but the victim had also been garrotted.
While Peter is looking for Magnus, Detective Mark Bille Hansen is assigned to the case. He is determined to link the bones in the box with the girl in the moat - but the hunt for the truth leads both he and Peter down a path so dark, they fear they may never return.

This is the second book by Elsebeth Egholm featuring the character of Peter Boutrup and having just finished it, I have decided to read this first one.

The pace will keep you engrossed as the story unfolds to a great finish.
The police, an ex-convict and a diver get involved in solving some strange deaths.  They all have different ideas as to whom and how the killings occurred.  They pursue their own ideas, ultimately ending in the same place.   This creates three different plots which you have to follow all the way to the end.

Elsebeth Egholm has been given the title of 'Denmark's Queen of Crime' and this is a title I would not argue with...

An excellent thriller, which will hold your attention to the end.