'The Good Girl' by Fiona Neill 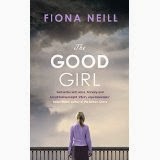 Thanks to lovereading.co.uk for supplying a review copy of this title...

Romy is sixteen and has just moved with her family to a sleepy, rural town in England with her family.  Life suddenly seems brighter when they get some new neighbours, with two teenage sons.  A bohemian family, Romy finds herself drawn to handsome Jay, while her conservative mother struggles to hide her distaste of the neighbours lifestyle. Hippies, sex therapists and far left,  they represent everything that Romy's parents are not.   Meanwhile, young love leads to Romy uncovering her new boyfriend's secret and making an offer that may change her life forever.  In a parallel story, her parents secrets are about to be uncovered and may make things worse.

A difficult book to review as it has multi-layered stories with different themes.  I was expecting a psychological thriller but it is more of a literary read with added thrill.  The ending is placed at the start of the novel and the story unfolds gradually.  A little to slow unfurling, I found the story lost its momentum for the middle third of the book.  The dangers of online activity and the lack of privacy is one that all parents of teens worry about.  This story looks at the issue, but the teenage Romy is an unusual example of a sixteen year old, so it was hard to see her making this mistake.  She was far too clever a character to do something so blatant.  Her inner sense would have kicked it, long before allowing such momentous act to be filmed on camera.  Her younger brother was actually really annoying and the product of a very odd coupling of parents.   Her mother and father's mistakes also seemed improbable.

The marketing and blurb suggested one book, but reading it proves another novel entirely.
A good read, if a bit too long.