Thanks to Penguin Ireland, I am delighted to be part of this extract tour for Whiskey Tango Foxtrot by David Shafer.  Every day this week, different blogs will post extracts from the opening pages of this intriguing novel.  For part 1, please go to  http://www.shotsmag.co.uk. For tomorrow's extract, please check out  http://col2910.blogspot.co.uk.

Deep in the forest near Burma's border with China, a young woman sees something she wasn't supposed to see.

In Portland, Oregon, a troubled young man crashes his bicycle on his way to work - and then gets fired.

In New York, a famous self-help author goes on daytime TV - and suddenly conceives 'a book that would take him beyond talk shows'.

What connects these three people - though they don't know it yet - is that they have come to the attention of the Committee, a global cabal that seeks to privatize all information. And each of them will, in their different ways, come to take part in the secret resistance struggle spearheaded by a scarily clever hacktivist collective - a struggle built on radical politics, classic spycraft and eye-popping technology. Along the way, they are forced to confront their own demons, reconsider their values, and contemplate the meaning of love, family, friendship and community. Whiskey Tango Foxtrot is at once a page-turning thriller, a deeply absorbing psychological novel, and a visionary exploration of the possibilities and hazards of our online lives.

Out now in paperback and e-book

Leila let the tedium flow around her like lava while she filled her pad with notes that would help her get through the next week of this frustrating job. Her title was director, in-country, Myanmar/Burma. But back in New York there was a country director, Myanmar/Burma. The silliness of the titles should have been her first clue that Helping Hand was a bush-league NGO. Though deep-pocketed, apparently—HQ was two floors of a skyscraper in midtown Manhattan. They’d hired her to do the advance work on what they said would be a twenty-year commitment to public health in northern Burma. She was supposed to be establishing a country program!—and her New York bosses said it like that, like she was a general in a tent or something, when what they really meant was rent an office, buy some desk chairs, and find out who else was working there and what wasn’t getting done. But beyond that, her two or maybe three New York bosses couldn’t even agree on what the Burma mission was. One of them thought Helping Hand should be identifying strong female candidates for full-ride scholarships to the school of nursing at Boston College. Another one thought the organization should be setting up village-based primary-care health clinics. Mainly her bosses sent her conflicting e-mails and sabotaged one another’s goals.

And in truth, Leila had herself underestimated the difficulty of achieving anything in a place like Myanmar. She had done war-torn, she had done devastated, but this living-under-tyranny thing was a superbummer. The Myanmarese (Myanmartians, she called them in her head; the stenoglyph was an M with an ovoid helmet and antennae) spent all their energy protecting what little they had or avoiding persecution; there was nothing left over for hope. And no one on the outside cared that much, or was even sure of its name. Was it called Burma, which had something to do with Orwell? Or Myanmar, which sounded like a name cats would give their country? The rest of the world just avoided this place, as on the street you’d avoid a stinking, pantsless drunk—because where would you even begin?

And where was that stupid little colonel? Leila was running low on anti-impatience techniques. The room seemed to have been designed to distill boredom and discomfort and focus it on the occupant. It was like being under some sort of time-stretching ray. There was the stippled layer of dust on everything; there was nothing to read but the No Smoking sign; there was one plastic fan in the corner, its electrical cord shorn off as if with a serrated knife. Smells seeped from the wooden benches and plastic blinds—cigarette smoke and greasy food and the vapors emitted by anxious humans.

GIVEAWAY (UK and IRL ONLY) 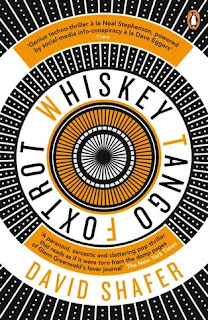 To be in with a chance of winning a PB edition of #WhiskyTangoFoxtrot please enter via rafflecopter link below.

a Rafflecopter giveaway
Posted by bleachhouselibrary at 00:05