"Searching For Steven" by Jessica Redland. Review and author feature. 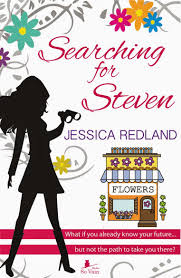 When Sarah Peterson accepts her Auntie Kay’s unexpected offer to take over her florist’s shop, she’s prepared for a change of job, home and lifestyle. What she isn’t prepared for is the discovery of a scarily accurate clairvoyant reading that’s been missing for twelve years. All her predictions have come true, except one: she’s about to meet the man of her dreams. Oh, and his name is Steven.
Suddenly Stevens are everywhere. Could it be the window cleaner, the rep, the manager of the coffee shop, or any of the men she’s met online?
On top of that, she finds herself quite attracted to a handsome web designer, but his name isn't even Steven...


During this unusual search, will Sarah find her destiny?

This debut from Jessica Redmond is a little slice of chick-lit heaven.  It has all the right ingredients; humour, romance, set-backs, misunderstandings and lots of best friend advice.  Turning the pages of this novel is like picking up the phone to catch up with your childhood friend, who you haven't seen for a while.  It's comfortable, heartwarming and endearing.
Sarah is far from perfect.  She worries about her weight (don't we all), settles for the wrong men and depends a lot on her two best friend's opinions.  When she relocates to her hometown, leaving her London life behind, she begins the search for Steven, which results in some hilarious encounters.  Through it all, she has friends Elise and Clare, who are polar opposites but who have Sarah's best interests at heart.  Aunty Kay is a wonderful character and I wish she was part of my life!

The writing is light, warm and flows nicely.  Like all Rom-Coms, there is predictability, but the humour and clever character interaction keeps you hooked.  The florist shop sounds divine and the local pubs and restaurants, featured in the book, make Sarah's hometown seem idyllic.

I am now officially a fan of Jessica Redland and can compare her with authors like Sophie Kinsella, Jenny Colgan and Claudia Carroll.  Here's to another great women's fiction writer on the block...

Exclusive Author Feature: The creation of Searching For Steven