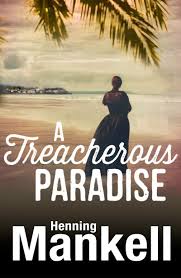 Thanks to Kay Mitchell for reviewing this title...

Hanna Lundmark escapes the brutal poverty of rural Sweden for a job as a cook onboard a steamship headed for Australia. Jumping ship at the African port of Lourenço Marques, Hanna decides to begin her life afresh.
Stumbling across what she believes to be a down-at-heel hotel, Hanna becomes embroiled in a sequence of events that lead to her inheriting the most successful brothel in town. Uncomfortable with the attitudes of the white settlers, Hanna is determined to befriend the prostitutes working for her, and change life in the town for the better, but the distrust between blacks and whites, and the shadow of colonialism, lead to tragedy and murder.

Henning Mankell's A Treacherous Paradise is an engaging read as the reader's curiosity is whetted from the beginning about who Hanna Lundmark was who left her diary under the floorboards of the Africa Hotel in Beira. The reader is then back in 1904 this time the story is unfolding at sea on a ship bound for Australia where Hanna has been placed as a cook. Mankell's positioning of Hanna as the outsider is the prism through which this story unfolds; she has unusually been appointed cook in a world normally dominated and occupied by males on board ship that carries cargo not passengers. It soon becomes clear that Hanna has been sent from home by her mother as she can no longer afford to keep her and feed her at home after the death of her father at a time when yet another famine may descend on their homeland.

The introductory quote from Plato can be read as a summation of this novel 'There are three kinds of people: those who are dead, those who are alive, and those who sail the seas.' Hanna has sailed the sea and has already been on a journey of discovery prior to setting foot in African soil. She has been married, widowed and lost a baby within a very short space of time and now she embarks on yet another level of experience. Finding herself in a brothel which she had assumed was a hotel is as far removed from home as one could imagine.

The landscape is no longer the sea but the prejudice and injustice dished out by self serving Europeans on the African people enslaved in their homeland. The reader is well aware that the topic is not new and has been dealt with in many variations such as Barbara Kingsolver's Poisonwood Bible or from the native perspective of Chinua Achabe's works such as Things Fall Apart. However, Mankell's perspective uses another perspective. His is a tale of racist discrimination with another layer added in. This is the story of racism and discrimination from the female perspective. The story is of those outside the fold not only because they are black but they are women and prostitutes and as in Hanna's case, the outsider without a male to escort or protect her and who struggles initially with the language with which to communicate. Initially her only security is the money given to her by the ship's captain Svartman but as it runs out she makes a pragmatic decision to marry Vaz to ensure her safety.

Time and again the text reveals the blindness of the white man to those he enslaves. The African people are intuitive and wise and full of generosity to those in need.  It was Felicia and Laurinda who cared and looked after Hanna while she miscarried and at her most vulnerable they looked after her basic needs. African women who earned a living through prostitution overcame any prejudice they may have understandably have had towards a white woman and a stranger in their midst. Felicia tells her:
" I did not know how you were or where you came from......But I got to know
you through your blood"

It is ironic the Attimilo Vaz, himself a fraudster considers all the women who work for him as liars and engages the services of a white nurse to care for Hanna who is already on her way to recovery anyway.  Ana Dolores' examination and approach to Hanna is clinical and abrupt a total antithesis to her experience with Felicia and Laurinda. By the end of the novel Ana Dolores has taken over the business of breeding white hunting dogs bred specifically to hunt down the native population and kill and yet the farm she takes possession of has become a mirror of her true self, unkept and unclean.

This is a novel well worth reading and it can be read through many prisms. It works as a tale of growth and development for a young girl forced through poverty to learn to survive on the sea of life. Hanna marries for love and marries for survival. She learns how to communicate in a language and negotiate cultures very alien to those she grew up in. It also works as a study of everything that is wrong about colonisation and enforced dominance by those only interested in their own ideologies. Carlos is a living trope for the ridiculous cruelty of enslavement whatever form it may take A wild animal dressed as a waiter in a waiter's outfit who is expected to behave like a human reverts to his true nature by escaping to the wild where he may have lost his ability to function as his true self. He has been positioned by his captors in no man's land neither truly human or animal.


The story concludes on the cusp of what may be another adventure for Hanna or an end as she swallows a potion left to her by Moses. The reader is left to draw their own conclusions. A fitting ending to a story that cannot reach a definitive end as the issues of bigotry, injustice, prejudice and enslavement live on in a world that considers itself to be advancing rapidly on so many levels. Man has enough knowledge to fly by Pluto yet the basic fundamentals of human rights and civil justice are still to this day not a given but a dream.

A Treacherous Paradise is published by Vintage and is available in paperback and ebook format.

This title can be ordered, with Free WorldWide Postage, and 19% discount Here and the ebook is available via Amazon link below: