#IrishFictionFortnight - Day 3 - "After The Fire" by Jane Casey. Author Q&A and Giveaway. 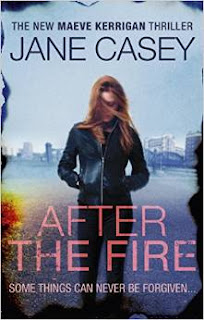 Big thanks to Ebury publishing for donating a copy of Jane Casey's latest Maeve Kerrigan thriller.  To be in with a chance of winning this title, just enter via rafflecopter link below.  Good Luck!

After a fire rips through a North London tower block, two bodies are found locked in an 11th floor flat. But is the third victim that ensures the presence of detective Maeve Kerrigan and the murder squad. It appears that controversial MP Geoff Armstrong, trapped by the fire, chose to jump to his death rather than wait for rescue. But what was such a right wing politician doing in the deprived, culturally diverse Maudling Estate?

As Maeve and her senior colleague, Derwent, pick through the wreckage, they uncover the secret world of the 11th floor, where everyone seems to have something to hide…

Jane Casey kindly agreed to fill us in on her amazing character, DC Maeve Kerrigan, for #IrishFictionFortnight:

How would you describe DC Maeve Kerrigan to someone who has not read any of the series yet?
She’s a young detective constable in the Metropolitan Police, working on a murder investigation team that handles cases of special interest from across the city. She was born in London but has Irish parents  - I like to play up the differences between the two cultures! She’s sometimes wrong-headed, hard-working, ambitious but not always confident in her considerable abilities. She works with a detective inspector, Josh Derwent, who’s the definition of an alpha male and gives her a hard time but adores her really.

How did Maeve become a member of the Murder Squad?
I wrote a prequel novella, Left for Dead, about Maeve’s first encounter with the chief superintendent who runs the team, Charles Godley. She’s a police constable who makes a key discovery in the search for a very unpleasant serial rapist. He’s impressed by her intuition and perseverance and encourages her to become a detective. He wants a young female detective on his team because there aren’t any other women on the team at the time, and he values Maeve’s perspective. Of course, other people assume it’s because Maeve is attractive. She can’t win.

Does Maeve struggle as a female in the predominately male police force?
She doesn’t have an easy time of it. Her colleagues are quick to assume that she’s emotionally involved with her superior officers. Derwent is particularly keen to point out any ‘female’ behaviour, from crying at work to being irrational. And she doesn’t want to lose her essential femininity so she can join in with the boys – she wants to be herself, with all of her sensitivity and empathy. But sometimes she has to talk tough.

Tell us about the locations in the series.
I love writing about London because literally anything can happen in such a big, diverse city. It’s like nowhere else. Also, readers around the world are very much aware of London. The scene is set for the characters before I ever write a word of description. The murder team go anywhere within the Met’s territory. In reality, the area is divided up between three different murder investigation teams, each with their own area. I fully intend to write about Ireland at some point in the future, but I’d like to be living in Dublin to avoid falling into the trap of being sentimental about it. James Joyce may have been able to write long-distance about Dublin, but I’m not sure I can!

Does a crime thriller need a romance within its pages to balance the darkness?
I think it needs strong relationships between the characters. I love writing romantic scenes, but it’s not just romance that drives the characters in the series. In real life, people who work in difficult circumstances rely on humour to get them through, and there’s a lot of humour in the books. Maeve’s romantic life is a strand running through the series, but that’s a reflection of her age and her current predicament. She’s nearly thirty and she needs to decide if she wants domestic bliss or to devote herself to her work – or even try to have both. And she’s at least as incompetent in her personal life as she’s effective in her profession.

How much of yourself is in Maeve?
She’s far feistier than I am! I would curl up and die if I had to do a tenth of the things she does. I’m much more trusting than she is – I tend to assume that people are nice until they disappoint me. She’s the opposite. I think we share a sense of humour. We both drink gin and we both hate weak tea. And neither of us can cook at all…

Out of the six novels (and short prequel), which was the hardest to write?
I think the hardest book is always the next one. There always comes a point where you think the last few books were a fluke and you can’t do it and everything is awful . . . but you go on.

Where did the idea for the Maeve Kerrigan character stem from?
I wanted to write about someone with an Irish background at least, because that tension between two cultures really interests me. I like that she’s not really English but she can’t see herself as Irish either, having been brought up in London. She’s a true outsider. And I wanted to write about that turbulent twenties/thirties time when women are under huge pressure to establish themselves but they’ll get judged no matter what they do. She has a lot to lose, basically, and I think that makes for interesting tension.

Can the books be read out of sequence or is important to read in their order of publication?
I’d say you can read them out of sequence, because I do make a huge effort to make them satisfying as individual stories. But the characters have come a long way since the first few books, and I’ve learned a lot from writing them. I’m very proud of the last three, and I’d say to new readers that they can start from The Stranger You Know without too much fear of confusion.

Can we expect more Maeve Kerrigan books or are you concentrating on anything else?
You can definitely expect more Maeve – I’m working on the seventh at the moment, and I have a very strong idea of where the series is heading. I’d also like to fit in some more stand-alone crime novels if I can. My first book was The Missing, and writing it was very different from writing a series. I’d like to revisit that kind of book. And of course I also have a series for teenagers, featuring Jess Tennant. The third book, Hide and Seek, is just out. I started out as a children’s books editor commissioning young adult novels, and writing them is a huge pleasure.

"All my criminal elements have some basis in reality, no matter how awful they may be. Nothing is completely farfetched." Jane Casey
Crime is a family affair for Jane Casey. Married to a criminal barrister, she has a unique insight into the brutal underbelly of urban life, from the smell of a police cell to the darkest motives of a serial killer.
This gritty realism has made her books international bestsellers and critical successes; while D.C. Maeve Kerrigan has quickly become one of the most popular characters in crime fiction.
Twice shortlisted for the Irish Crime Novel of the Year Award as well as the Mary Higgins Clark Award, Jane has been recently longlisted for the CWA Dagger in the Library Award.
You can order your copy, with Free Worldwide Postage and 29% discount, here.  The ebook can be ordered via amazon link below:

a Rafflecopter giveaway
Posted by bleachhouselibrary at 08:05