#IrishFictionFortnight - Day 5 - "The Takeover" by Jonathan Dunne. Review and Giveaway. 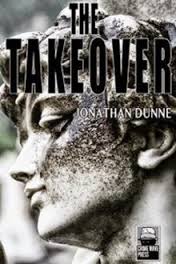 Thanks to the author, there are two signed copies of The Takeover to Giveaway.  To be in with a chance of winning one, just click on rafflecopter link below.  Good Luck!

Set in the criminal world of Dublin where the Doherty family rule with absolute violence , a simple theft from the family sets in motion a long,vicious battle for ultimate control of the city. This three pronged battle sees the Doherty clan and it's head Malcolm fighting for control of the criminal underworld with Nathan Corbally,who as a youngster was neglected by his excuse of a father, while all are pursued by the relentless Gerald O'Brien, the Garda who refuses to be bought by the Dohertys.
Nathan Corbally,whose mother died whilst he was an infant, lives in squalor and neglect,his father more interested in booze and drugs than raising a child.Forced to fend for himself and to protect himself from abuse by his fathers acquaintances Nathan develops a talent for breaking and entering houses in order to obtain food and items to sell for cash.One such break-in to a house of the Doherty clan leads to his first meeting with Malcolm Doherty.
Malcolm although the youngest of the Doherty siblings is its head and the one driving its domination of the criminal underworld. Drugs,prostitution,racketeering all contribute to the Doherty fortune but when Malcolm meets Nathan Corbally for the first time he sees something in the child that niggles at him,a certain coldness in Nathan's demeanor that perturbs him.
Trying his best in a police force that is riddled with corruption,Gerald O'Brien
has made it his life goal to bring down the Doherty clan and Malcolm in particular. As the story unfolds these three strands cross paths and the consequent battles over the years take their toll.
This is a cracking good read,a proper modern crime thriller. The success of Love/Hate over the past few years has shone a light on the criminal world of Dublin,problems common in all cities throughout the globe. This novel continues that theme with its gritty reality,the constant need of the crime gangs to set a marker in their quest for dominance. The Doherty clan are ruled by the urbane Malcolm who rarely gets his hands dirty and stays removed from the bloody stuff unless its absolutely necessary. Nathan Corbally rises from a neglected,abused kid to become Malcolm's biggest rival,driven at all times by his desire for revenge. In the middle of all of this is Gerald O'Brien,whose relationship with Nathan adds a complicating factor.
I really enjoyed this book. At times the time line of the story was a little hard to follow,in particular the ageing of Nathan but I'm probably being a bit picky. The story flows well and the reader feels for Nathan despite his criminal exploits,a good sign for the author. There is no attempt to sugar coat the seedy underworld and in the end does anyone really win?

Watch the book trailer for The Takeover here

38 year old Jonathan Dunne spent his teenage years working manual labor jobs  before returning to school and college. He is now a sports journalist with an  Irish television network. He is also a columnist with several sports magazines  and co-editor of the Irish Grappler Magazine. Needless to say Jonathan can look  after himself, not least because he has a Black Belt in Taekwondo. He lives in  Dublin, Ireland with his wife and children.

a Rafflecopter giveaway
Posted by bleachhouselibrary at 08:12