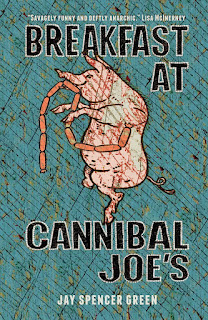 Thanks to the author, I have a signed copy to giveaway for #IrishFictionFortnight.  Just enter bia rafflecopter link below.  Good Luck!

When asked for his favourite Irish Author, Jay hesitated, like us all...

"I struggled to decide on a favourite Irish book or author because there are so many, but I narrowed it down to Oscar Wilde and John McGahern. Finally, I had to plump for the latter's non-fiction book Love of the World. I find McGahern's writing unfailingly moving, but opted for this collection because it features an essay on my favourite pub in all the world, Blake's of the Hollow, in Enniskillen. It has not changed one jot since McGahern described it."

You’re not assigned to oversee a CIA front company in Dublin unless you screwed up royally—and Joe Chambers did. If he didn’t know so much about so many people, the CIA would probably terminate him—possibly in both senses of the word. Instead, he’s stuck managing Whetstone Publishing while his stateside boss comes up with ever more daft ways to maximize profits.
But Joe’s frustration is only just beginning. An MI6 agent keeps breaking into his apartment and stealing his booze, presumably revenge for blowing the guy's cover in Athens; his publishing assistant’s too smart for her own good; and with head office’s cost-cutting measures hitting new highs of lunacy, he might need to start selling drugs or—God forbid!—move back to the States. Oh, and he’s got a tapeworm named Steve happily curled up in his guts.
A raucous mix of double crosses, brothels, and cocktail recipes, Breakfast at Cannibal Joe’s is a dark and twisted picaresque tale for fans of Catch-22 and Fight Club.

Jay was born in the English midlands but has lived in and around Dublin for the last 22 years. His wife is Irish and was born in Enniskillen, his location this weekend for the Beckett festival. He is part of a little H.W. Wilson mafia (i.e., people who used to work for H.W. Wilson when it had offices in Dublin), including Sean O'Keeffe, the MD of Liberties Press; Jason Michael, editor of the Irish Times online; and authors Niamh Greene and Caitriona Lally. Indeed, Sean, Jason, Niamh and Caitriona all worked in his department, Readers' Guide Abstracts. He is also part of a little blogging mafia that includes Lisa McInerney and Sinead Keogh; they blogged together at Ramp.ie and Coddlepot.com.

Breakfast at Cannibal Joe's is available in paperback and ebook format.

a Rafflecopter giveaway
Posted by bleachhouselibrary at 11:36