#IrishFictionFortnight - Day 8 - "A Crack In Everything" by Ruth Long. Author feature & Giveaway. 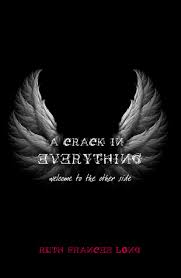 Thanks to the author, there is a copy of this title up for grabs as part of #IrishFictionFortnight.  Just enter via rafflecopter link below.  Good Luck!

Classic Influences – The Hounds of the Morrigan by Pat O’Shea.
By Ruth Frances Long

When I was a teenager the most wonderful book came out – Pat O’Shea’s The Hounds of the Morrigan (OUP, 1985). I was probably a little older than the target audience but that didn’t matter. For so many reasons. Not least because The Hounds of the Morrigan is a brilliant, boundary crossing book, blending adventure and mythology. It opened up a world of mythology to me in a way that was fresh and exciting. I’d heard the tales of course, but they were old and dull, terribly serious. Fadó fadó…
Instead, here were characters who leaped off the page, made me laugh and cry - Pidge, shy and serious, determined but unsure and feisty little Biddy who went at life with all the energy and gusto only a five year old can have; Macha with her blue hair and dark magic; Bodbh, almost running Pidge down with the motorbike; even a great elk! Cúchulainn and Maeve, Aongus Óg and the Dagda, names I’d heard but never really appreciated. And of course the Morrigan herself, on her quest to find the Olc-glas and use its power to destroy the world, the stuff of nightmares.
And it was frightening. Terrifying. No punches were pulled and the final battle felt desperate and terrible.  In a world of cosy Irishness, of tourist twee and Bord Failte imagery that was, to me anyway, Irish children’s literature at the time, it blew everything else out of the water.
It paved the way for many books to come, for this new Golden Age of Children’s literature. And, if you’re lucky enough to lay hands on a copy, still reads as fresh and thrilling as today.
To say it has been an influence on my writing, while absolutely true, is an understatement. It has been an influence on my reading as well. Through intertextuality we learn about far more than the text we are currently reading. We learn about the texts that are referenced within it, about the stories that are told and retold time and again. Our folklore reinvents itself in stories, which reinvent themselves in plays, films and novels, and run back to stories once again. We first learn about Shakespeare, for example, not through reading the text of Hamlet but from The Lion King, not from Romeo and Juliet but from listening to West Side Story. That is the wonder of storytelling in literature. Story is king in The Hounds of the Morrigan, and all the stories it draws upon are seamlessly woven into the tale.
While my Cú Sídhe and their kin of A Crack in Everything and A Hollow in the Hills are different, they all carry the echoes of the hounds in this book, and the fae creatures they accompanied. Not sweet fairies, or benevolent gods and goddesses, but creatures of the dark, ancient, cunning and terrifying.
If any book needs to get back into print as soon as possible, this is it.

"A Crack In Everything"

Welcome to The Other Side ...
Chasing a thief, Izzy Gregory takes a wrong turn down a Dublin alley and finds the ashes of a fallen angel splashed across the dirty bricks like graffiti. She stumbles into Dubh Linn, the shadowy world inhabited by the Sidhe, where angels and demons watch over the affairs of mortals, and Izzy becomes a pawn in their deadly game. Her only chance of survival lies in the hands of Jinx, the Sidhe warrior sent to capture her for his sadistic mistress, Holly. Izzy is something altogether new to him, turning his world upside down.
A thrilling, thought-provoking journey to the magic that lies just beside reality.

Ruth Frances Long writes dark young adult fantasy, often about scary fairies, such as The Treachery of Beautiful Things, A Crack in Everything and the forthcoming sequel A Hollow in the Hills (O’Brien Press, 7th September 2015).
The book launch for A Hollow in the Hills is at 6.30pm on Wednesday 9th September 2015 in the Gutter Bookshop, Cow’s Lane, Dublin 2 and everyone is invited. Yes, especially you!
She lives in Wicklow, the Garden County of Ireland, and works in a specialized library of rare, unusual & occasionally crazy books. But they don’t talk to her that often. Or maybe she’s learning not to listen. Maybe.
She recently won the European Science Fiction Society Spirit of Dedication Award for Best Author of Children’s Science Fiction and Fantasy, 2015.
http://www.rflong.com/, @RFLong on Twitter, R. F. Long on Facebook, RFLong on Tumblr, RuthFrancesLong on Instagram

A Crack In Everything is published by O'Brien Press and is available in paperback and ebook format.
You can order this title, with Free Worldwide Postage, here and the ebook can be ordered via amazon link below:


a Rafflecopter giveaway
Posted by bleachhouselibrary at 12:17