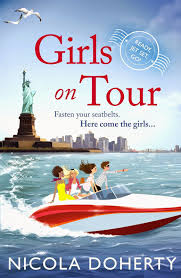 A big Bleach House Library Welcome to Nicola Doherty, who has agreed to tell me about one of her favourite Irish reads...

Thanks to the author, and Headline Books, I have a copy of Girls On Tour to giveaway for #IrishFictionFortnight.  Just enter via rafflecopter link below.  Good Luck!

The Lilac Bus by Maeve Binchy

"Like most schoolgirls in Ireland in the 1990s, I was very familiar with the poster of Great Irish Writers that adorned every classroom wall in the land. Beckett, Behan, Swift – their faces looked benignly down as we sweated over plate tectonics or the then-hot-topic of ‘dífhostaíocht’ (unemployment).  Great writers all, but they were all men. So I was thrilled when The Irish Times recently did a brilliant new version of the poster with a roster of great female writers. I did, though, wonder: where was Marian and where was Maeve?

For Irish Fiction Fortnight I’d like to celebrate Maeve Binchy’s The Lilac Bus. It’s not one of her most famous books but I think it deserves to be. Published in 1984, it tells of eight people travelling from Dublin to their home town of Rathdoon, in a lilac-coloured minibus.

Out of this simple scenario Maeve weaves pure gold. Each character is grappling with a drama that rumbles under the surface, mostly unnoticed by their neighbours. ‘Desperate Mikey Burns with his dirty jokes’ is heroically holding his family together against all the odds. Carefree Dee Burke, the doctor’s daughter, is having an affair with a married man. Not only that, each character is completely different depending on who is describing them, so that we end up seeing them in a very multi-layered way. I found this very helpful while writing my latest book Girls on Tour, which is narrated by four different characters. Another thing I (hope I) learned from this book is that each character, no matter how small, is at the centre of their own story. A good lesson for life as well as for writing.

Re-reading it, I marvel at her skill. Because the same events – the bus journey home and Friday night in the pub – are shown from eight different perspectives, it could have been very repetitive. Not a bit of it, though. The effect is more like a jigsaw puzzle that adds up to a rich and complex picture. The Lilac Bus shows us how great tragedies and love affairs can happen right next to us, in the pub or on the bus, without us even noticing. That’s where the Maeves of this world come in."

MY REVIEW OF GIRLS ON TOUR BY NICOLA DOHERTY

Poppy, Lily, Maggie and Rachel.  Four girls, some attached, some not. All seemingly content with their lot but open to suggestions.  The girls are young, ambitious and game for a laugh.  Five different trips abroad and each character gets individual attention, culminating in a grand reunion in Manhattan.  There is Poppy in Paris, Lily in LA, Maggie in Meribel and Rachel in Rome.  Great food, fancy drinks, fashion galore and some romance thrown in.  All the right ingredients for a fantastic summer read...

Originally written as separate ebook novellas, this book combines the stories of the four girls, linking them seamlessly into a complete package.  Nicola Doherty has written the ideal sunlounger book, and I speak from experience!  On a recent short break, I was instantly transported to the light and humorous world of these four friends.  Paris came to life with less emphasis on its culture and more on the atmosphere, LA dripped with its golden, perfectly toned residents, Meribel sparkled with its off-piste antics and Rome zipped by like a vespa through its historical streets.  The stories are light, fun-filled and ideal for a lazy day by the sea.  No extra thinking is required and the pages practically turn themselves.  The characters vary enough to lend a realistic feel to their journeys and there are plenty of laughs.  As the girls left each destination, I felt I was also leaving.  A great way to travel, without the expense!  If you have a holiday booked, add this to your shopping list.  It should be on a shelf right beside the sun creams, in my opinion...

Nicola grew up in Monkstown, Co. Dublin and went to Muckross Park and Trinity College before moving to London. She worked in publishing for several years before writing her first book The Out of Office Girl, which was shortlisted for the RNA Romantic Novel of the Year 2013 in the Romantic Comedy category. Her latest book Girls on Tour is out now from Headline. Visit her at nicoladohertybooks.com or follow her on Twitter @nicoladoherty_

Girls On Tour is published by Headline and is available in paperback and ebook format.
You can order your copy, with Free Worldwide Postage, here and the ebook can be ordered via amazon link below.

a Rafflecopter giveaway
Posted by bleachhouselibrary at 05:31