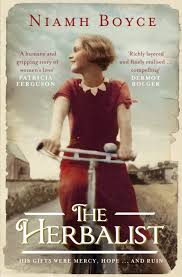 A massive thank you to the author for agreeing to this feature, and for donating a copy of The Herbalist for one luck reader.   One of may favourite contemporary novels, the winner can escape into the world of 1930s Ireland.  Enter via rafflecopter link below.  Good Luck!

1.       Where did the idea for The Herbalist stem from?
It came from the real life case of Don Robert Rodriquez De Vere who arrived in my home town of Athy in the 1930s and set himself up as a herbalist.  I came across his case while archiving old newspapers  - he had been arrested and imprisoned for an unnamed offence.  Many years later, when I began to write, he just popped up in one of my stories...

2.       Did you find many details about the real Herbalist when you began to research the book? I did, I read his Herbal Surgery notebook, which gave details of his patients, cures and charges. I also studied the depositions from the real case and spoke to people who remembered him.

3.       Did you base Emily on a real person, or is she a completely fictional character? Emily is fictional, but felt very real as I wrote her. The only character who is inspired by a real person is The Herbalist.  I didn’t want to delve other people’s lives and use them for the book; it would have felt like a trespass but when I was conducting my research (after I’d written the first draft) some of the similarities between the book and the case were uncanny.

4.       Was it fun escaping back to 1930s Ireland or did you feel a sense of claustrophobia? I enjoyed the time I spent writing the book, more because I loved being inside Aggie and Emily’s heads, than being immersed in the 1930s. Imagination helps you to survive in a suffocating society, and Emily was very imaginative.  Aggie was just so earthy and honest; it was great to work with her voice.  So over all it was good, I relish research, and loved that aspect of writing the book. In a way it didn’t feel like escape, but more like digging deeper into what I felt already knew.  This was probably due to my sense of place; I lived most of my life in the town the book was set in, and know its voices, folklore and river like the back of my hand.

5.       Carmel is what I would imagine a shopkeeper in rural Ireland, back in the 1930s to be like.  Harsh, stern but for a purpose.  Did you consciously decide to balance this with Don’s softer approach? No, it wasn’t conscious. The more I wrote in their voices, the more they fleshed out.  As a couple, we meet them at a crisis, at their worst. I found Dan interesting,   he is so influenced by the church, and rails against licentiousness, yet he falls into temptation at the first opportunity.

6.       The opposite reactions to the arrival of The Herbalist, to this small Irish town, were so well written.  Do you think women today are still guilty of believing in the power of lotions and potions, while men are more pragmatic about the whole concept?
In those days, an Indian Herbalist was very exotic, and rare. I think the women fell for the glamour, and projected their fantasies onto the stranger.  In terms of believing - I think there was genuine belief in his potions, or perhaps a desire to believe. He would have been a lot cheaper than a visit to the local doctor, and he would have charmed them, made them feel he cared. His medicines may have been perfectly good, we don’t know. He was seen collecting herbs; he may have been the real deal.

I think what the women longed for wasn’t his potions, but what they represented. Even if there was nothing in the bottles, they existed as talismans against fear.  It was a very restrictive time to be a woman. Sex could, and did, mean death in childbirth. Sex, could and did, mean incarceration for life, separation from your child.  Perhaps the men had less need of what he seemed to promise, perhaps they could afford to be more suspicious.
Nowadays, women have more control over their lives, but we do seem to fall for hope sold in bottles.  We seem to fear age over all else.  Society as a whole seems to be terrified of age, especially the aging female. There are no older women in movies for example, and if a female character is seventy, it’s usually played by a fifty year old. So they are invisible, a whole generation of women who could inspire, who we could learn from. And what must it be like, to be in your seventies and have the world reflected back as if you don’t exist? It must be like looking in a mirror and seeing no one there.

7.       If they were to make The Herbalist into a movie, who would you see as playing him?
A John Malcovich type perhaps? And definitely Valentino, if he was alive.

8.       If you could pick the brains of one famous Irish author, from the past, who would it be?
Oh I feel bad about this answer, but no one famous comes to mind. I’ve no respect for the notion/myth of great Irish writers, and guess I equate ‘the past’ with that myth. My own secondary ‘education’ in English was restricted to an all male cast and privileged very  limited themes (no birth, no sex,  no female point of view except Dickinson) - it left me cold.
There are some exciting contemporary Irish writers, and I love to read them. Also, The Long Gaze Back, (an anthology of Irish Women writers past and present) has just been edited by Sinead Gleeson and is coming out this September,  I’ll probably find some voices in there that will change my mind about the past!

9.       The cover of The Herbalist is a wonderful design and is one I display on my library table, for all guests to see.  How important do you think a book cover is these days?
Thank you Margaret, I didn’t chose the cover myself, that was all down to Penguin. Covers are vital, especially for a debut. The cover gets people to pick the novel up and open it. It also signals what the books about, and what genre. That changes all the time, a book with a grey cover means something very different now than it did before 2013!

10.   Can we expect more historical fiction in the future, or will you try something different?


I’m working away on another book, which is set even further back in time.  After that, I’d like to write on something much more contemporary, and I’ve promised a friend of mine a one act play which should be a nice change, writing wise.

Having read some wonderful reviews in National Newspapers, I quickly placed an order for this book.  The first thing that struck me was the beautiful cover. The contents just blew me away!

The Herbalist is inspired by real events but is a work of fiction.

Set in 1930s Ireland, the novel centers around Emily, a teenager who is mesmerized by the arrival of The Herbalist, a kind of exotic pharmacist, who makes up wild and wonderful potions and lotions for the people of the town.  The ladies in particular, are fascinated with not only the goods for sale, but the whole concept of the dark and mysterious character.  The men are not so sure, and maybe with good reason.

" He just appeared one morning and set up shop in the market square.  It was drizzling. Everything was either a shade of brown or a shade of grey.  He was the lightest thing there, the one they called the black doctor.  He wore a place suit, a straw hat and waved his arms like a conductor.  The men spat about dark crafts and foreign notions, but the women loved him. Oh, the rubs, potions, tinctures and lotions he had. "

Carmel and Dan Holohan run the local grocers shop and have suffered a terrible tragedy.  Emily is called in to help them part time and soon becomes enthralled with the goings on in the town.  When a more permanent girls arrives to work in the shop, Emily is not impressed.  She watches from a distance and starts spending more time with The Herbalist. She sees and hears things that do not seem quite right and a darker side to this unusual man becomes obvious.

This is a debut novel of such a high caliber......The writing is fluid, gripping and almost seems coated with expensive, scented oils.  So observant, witty, warm and endearing,  I just did not want it to end.  I hated closing the back cover and knowing that was the last I would read about the characters.
The women in the book are the heart of the story. Although the character of The Herbalist is based on a real person, without the supporting roles of the town's women and their unique tales, the whole package could have been so different.
Carmel, Emily and Sarah, the new shop girl have stunning plots lines and page by page, chapter by chapter we are brought along at a steady pace through their lives in this small Irish town.

I highly recommend this book to lovers of Sebastian Barry, Anne Enright and Maggie O' Farrell.
Niamh Boyce is up there with the best of the best in Irish Fiction.

Nominated for the 2015 IMPAC award - The Herbalist - Niamh's debut novel, was critically acclaimed and won Debut of the Year at the Irish Book Awards in 2013.
An award winning poet, Niamh Boyce was Hennessy XO New Irish Writer Of The Year in 2012.
Her unpublished poetry collection was highly commended in The Patrick Kavanagh Award 2013.
She lives in the Irish midlands where she is working on a new novel, and a short story collection.
Niamh blogs at http://niamhboyce.blogspot.ie/

The Herbalist is published by Penguin and is now available in paperback and e-book.

You can order a copy of The Herbalist, with Free Worldwide Postage, here,  or get the ebook version via amazon link below:

a Rafflecopter giveaway
Posted by bleachhouselibrary at 10:56