Book Review: 'How To Get Ahead In Television' by Sophie Cousens. Guest Review from Kay Mitchell. 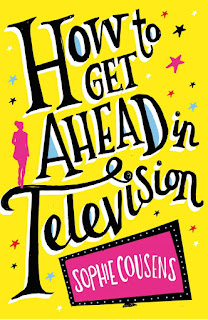 A sparkling comedy romance set in the madcap world of TV broadcasting.

From the winner of the #LoveatFirstWrite competition from Corvus and Lovereading.


Poppy Penfold desperately wants a career in television. After months of dead-end applications, she gets her big break with a temporary job as a runner for RealiTV. But to land a permanent role, Poppy will need to go head-to-head with fellow runner Rhidian: arrogant, highly competitive – and ridiculously good looking.

Poppy goes all out to impress, but somehow things don’t go to plan. Whether failing to prevent a washed-up soap star from becoming roaring drunk during Scottish game show Last Clan Standing, or managing to scare the horses during the filming of Strictly Come Prancing, Poppy gets noticed for all the wrong reasons. With highly strung presenters and distractingly handsome producers in the mix, it’s Poppy’s determination that will see her win or lose her dream job, and maybe her dream man too…

Featuring TV programmes such as:

Can Your Dog Do Your Job?

Till Death Do Us Party

Sophie Cousens has worked in television for twelve years. She attributes surviving this long to always knowing where the Post-it notes are kept, and her ability to carry six coffee cups at once. This is her first novel.

Well if you want an entertaining read this is the one for you. This book fits into the coming of age category with lots of hilarity thrown in and I do mean spontaneous laugh out loud moments. Fans of Bridget Jones-this is one to add to the repertoire with a little less angst and soul searching.

The reader is immediately drawn into the narrative as Penny Penfold seeks to find her way in the world as a working girl now that her halcyon days of University have come to an end. Typical of any girl in her early twenties who wants to carve out a path in an area she has a passion and an interest in, she has to fend off her mother’s well intentioned advice to steer clear and head to a steady career in banking. Perseverance pays off eventually and she secures a contract despite the mishaps surrounding her initial interview.

Penny is quickly involved in the day to day background goings on associated with the Media industry. As in all walks of life she has to negotiate how the pecking order works and quickly learns that she faces strong competition to secure a contract from the very handsome and charming Rhidian.
Many escapades later Penny finds herself in a compromising situation with the well-known lady killer James but makes a quick exit after a light bulb moment as to what is really going on.

As a light hearted read it works well. It is an easy read that will take you over a wet weekend without a doubt and what it lacks in depth it makes up for in entertainment.