I am delighted to be part of the blogtour for Behind Closed Doors by BA Paris.  I was fortunate enough to read a very early edition of this psychological thriller and devoured it!  This genre has exploded beyond all expectations recently and this debut novel deserves its place among the bestsellers hogging the bookshelves worldwide.

I have an exclusive extract for you to read and think you will be mightily impressed.  You can also read my review of Behind Closed Doors here

To be in with a chance of winning a paperback copy of this title, just enter via rafflecopter link below...

You can also join in the twitter vibe using #StaySingle 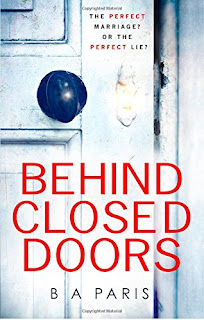 The perfect marriage? Or the perfect lie?
The debut psychological thriller you can’t miss!
‘Brilliant, chilling, scary and unputdownable.’
-Lesley Pearse, bestselling author of Without a Trace


‘Behind Closed Doors gives us a glimpse into the realities of a ‘perfect marriage’, with addictive and heart pounding moments guaranteed to have you looking at your friends and neighbours differently.’
-Margaret Madden, Bleach House Library

Everyone knows a couple like Jack and Grace. He has looks and wealth, she has charm and elegance. You might not want to like them, but you do.
You’d like to get to know Grace better.
But it’s difficult, because you realise Jack and Grace are never apart.
Some might call this true love. Others might ask why Grace never answers the phone. Or how she can never meet for coffee, even though she doesn’t work. How she can cook such elaborate meals but remain so slim. And why there are bars on one of the bedroom windows.

Present
‘I’m looking for my husband. Have you seen him anywhere?’
‘Yes, he came down about an hour ago, not long after you checked in.’
‘Do you know where he went? Did he go to the bar, by any chance?’
He shook his head. ‘He went out through the front doors. I presumed he was going to fetch something from the car.’
‘Did you see him come back in?’
‘Now that you mention it, no, I didn’t. But I was busy checking in another client at one point, so it could be that I didn’t see him.’ He eyed the phone in my hand. ‘Have you tried phoning him?’
‘Yes, but his mobile’s switched off. He’s probably in the bar, drowning his sorrows that he’s now a married man.’ I smiled, trying to make light of it. ‘I’ll go and have a look.’
I made my way to the bar but there was no sign of Jack. I checked the various lounges, the fitness room and the swimming pool. On the way to check the two restaurants, I left another message on his voicemail, my voice breaking with anxiety.
‘No luck?’ The receptionist gave me a sympathetic look as I arrived back in the lobby on my own. I shook my head.
‘I’m afraid I can’t find him anywhere.’
‘Have you looked if your car is still in the car park? At least you’d know whether or not he’d left the hotel.’ I went out through the front doors and followed the path round to the car park at the back of the hotel. The car wasn’t where Jack had left it nor was it anywhere else. Not wanting to go back through the lobby and face the receptionist again, I went in through the back door and ran up the stairs to the bedroom, praying that I would find Jack already there, that he would have arrived back while I’d been out looking for him. When I found the bedroom empty, I burst into tears of frustration. I told myself that the fact the car was missing went someway to explaining why he hadn’t answered his phone, because he never answered his phone while he was driving. But if he’d had to go back to the office on urgent business, why hadn’t he knocked on the bathroom door and told me? And if he hadn’t wanted to disturb me in my bath, why hadn’t he at least left me a note?
Increasingly worried, I dialled his number and left a tearful message saying that if I didn’t hear from him within the next ten minutes I was going to phone the police. I knew that the police would be my last port of call, that before phoning them I would phone Adam, but I hoped that in mentioning the police Jack would realise just how worried I was.
They were the longest ten minutes of my life. Then, just as I was about to call Adam, my phone beeped, telling me I’d received a text message. Letting out a shaky sigh of relief, I opened it and when I saw that it was from Jack, tears of relief fell from my eyes, making it impossible to read what he had written. But it didn’t matter because I knew what it would say, I knew it would say that he’d been called away unexpectedly, that he was sorry I’d been worried but that he hadn’t been able to answer his phone because he’d been in a meeting, that he’d be back soon and that he loved me.
I reached for a tissue from the box on the desk, wiped my eyes, blew my nose and looked at the message again. ‘Don’t be so hysterical, it doesn’t suit you. Something’s come up, I’ll see you in the morning.’
Stunned, I sat down on the bed, reading the message over and over again, convinced I had misunderstood it in some way. I couldn’t believe that Jack would have written something so cruel or been so cutting. He had never spoken to me in such a way before, he had never even raised his voice to me. I felt as if I’d been slapped in the face. And why wouldn’t he be back until the following morning? 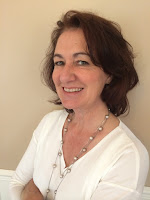 B A Paris is from a Franco/Irish background. She was brought up in England and moved to France where she spent some years working in Finance before re-training as a teacher and setting up a language school with her husband. They still live in France and have five daughters. This is her first novel.
Follow BA on Twitter @BAParisAuthor

Behind Closed Doors is published by MIRA on 11 Feb 2016 in paperback and ebook format...


a Rafflecopter giveaway
Posted by bleachhouselibrary at 01:40