"At The End Of The Orchard" by Tracy Chevalier. Blog Tour with Chapter One Extract. 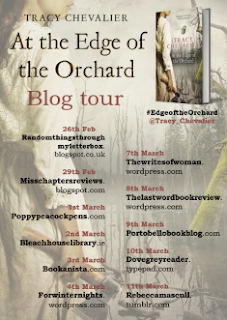 ‘Chevalier immerses herself in period and place. Her research, as always, is meticulous and lightly worn’ The Guardian


Thanks to Harper Collins, I have an exclusive chapter excerpt from Tracy Chevalier's latest novel, At The Edge Of The Orchard.  Published on 10th March 2016, this is sure to be a hit with fans of historical fiction, as well as literary lovers.  Check out the blurb and then scroll down for a sample extract... 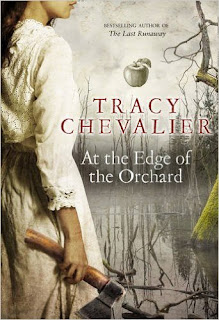 What happens when you can’t run any further?
In this rich, brutal story, Tracy Chevalier is at her imaginative best, brilliantly evoking the futility of our struggle to escape our roots, no matter how hard we try.
Ohio, 1838.
James and Sadie Goodenough have settled in the Black Swamp, planting apple trees to claim the land as their own. Life there is harsh, and as swamp fever picks off their children, husband and wife take solace in separate comforts. James patiently grows his sweet-tasting ‘eaters’ while Sadie gets drunk on applejack made fresh from ‘spitters.’ This fight over apples takes its toll on all of the Goodenoughs – a battle that will resonate over the years and all the way across America.
California, 1853.
Fifteen years later their youngest son, Robert, is drifting through Goldrush California. Haunted by the broken family he fled years earlier, memories stick to him where mud once did. When he finds steady work for a plant collector, peace seems finally to be within reach. But the past is never really past, and one day Robert is forced to confront the reasons he left behind everything he loved.

Tracy Chevalier is the author of seven previous novels, including the international bestseller Girl with a Pearl Earring. Renowned for her rich evocations of periods past, Girl With a Pearl Earring was Tracy’s second novel and in 2004 was made into a film starring Colin Firth and Scarlett Johansson. To date it has sold 5 million copies globally. Her other titles include: The Last Runaway, Remarkable Creatures, Burning Bright, The Lady and the Unicorn, Falling Angels and The Virgin Blue. In April, Reader, I Married Him is published, an anthology Tracy has edited in celebration of Charlotte Brontë’s bicentenary. The collection contains short stories by over 21 of the finest women writing today. Contributors include Lionel Shriver, Sarah Hall, Helen Dunmore, Salley Vickers and Tessa Hadley, who all use Jane Eyre’s famous words as a springboard for their own flights of imagination in a wide variety of tones and approaches. To read more about Tracy and her titles, visit her website www.tchevalier.com.

At The End Of The Orchard is published by Borough Press on 10th March and is available in Hardback and ebook format.