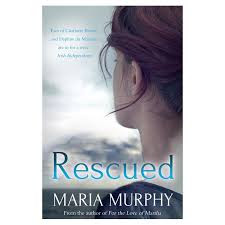 Huge thanks to Kelly Spillane for her guest review of Rescued by Maria Murphy.
We received a copy of this title, from the publishers, in return for an honest review...

It's 1889, in West Cork. A well off young man, named Blake washes up on a beach after crashing his boat in a bad storm.  He washes up on the Mizen peninsula, where he is found by a fisherman's daughter, called Ellen.  Ellen is a healer and is able to take the pain away from Blake, therefore saving his life.  However, when she meets Blake and realises that there is an attraction between them, she remembers a warning that she was given by her Grandmother when she was a little girl.  Ellen decides that in order to protect herself, the way she promised her Grandmother, she would have to remove Blake from her home and never allow him to come back.  Blake finds that he has fallen head over heels in love with Ellen and sets out to find her.  On their third meeting, the realise that they are made for each other and decide to be together.  But the course of true love never does run smooth and it's not long before Blake and Ellen are facing many obstacles in order to be together.

I loved that this book was set in Cork. Being from Cork myself, I liked being able to read about areas that I am familiar with.  I also loved how this was a classic love story that could have been set in any place in the world in any era and it still would have been the same story being told.  I was pleasantly surprised to find that it touched on topics such a same sex marriage and abortions, both of which are still something of a taboo subject for many people today, let alone nearly 130 years ago.  In my opinion, the nicest thing about this book is how the relationships of the characters are so well developed.  It is clear to see how much the characters care about each other from the very start of this novel until the very last page. I love that the cover falls in perfectly with the story line.  It is extremely eye catching and would doubtlessly make me pick it and have a look at it if I came across it in a book shop.

Recently, I have discovered the magic that is Historical Fiction and I can’t seem to get enough of this genre lately.  However, this book wasn't exactly my cup of tea.  I felt nothing for the characters and found that I didn’t really care what happened to them at any point throughout the book.  I found 'Rescued' to be a very hard read, and I got through it very slowly.  If it wasn't for the fact that the characters have to travel everywhere in a pony and cart, I would never have believed that this novel was set back in the 1880's.  For me, it lacked the detail that makes a Historical novel sparkle.  It didn’t describe the era enough and I would have very much liked to discover something new about this time frame, as it is one that I know very little about.  I also felt that there were way too many characters that were vital to the story in order to make it work.  I know that it centered on two characters mainly, but I found it very hard to remember who was who of the background characters.  I found myself picking this up and putting it down a lot, reading only one or two chapters at a time.  I just could not get into this book and even as the story developed more and became a little more interesting, 'Rescued' still failed to grab my attention for long periods of time.

I'm still not sure how I feel about this particular read.  I found it to be a very slow burner and it took me much longer than usual to finish it.  That being said, I am known to give up on books that I don't like, and I saw this one out to the end.  It's not a bad book and it actually has a lovely story once you get into it.  For me, the main problem was that it could have been set in present day as well as in the past.  It didn’t delve into the era well enough, containing too little description about the 1880's for my liking. It lacked depth and left me feeling cold when I finished it. This book would be perfect for people who love the classics and I'm sure that fans of Historical Fiction would find this to be a great read, it just wasn't for me.  If we all had the same tastes the world would be a very boring place.


Rescued is published by Poolbeg Press and is available in TPB and ebook format.  You can order your copy, with Free Worldwide Postage and 15% discount, HERE.  The ebook can be ordered via amazon link below: