Cover Reveal and Giveaway - 'A Darkness At The End' by Ruth Francis Long. 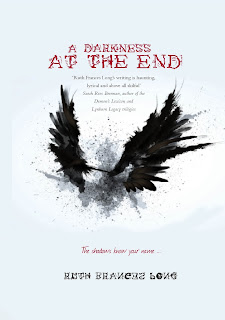 Thanks to O'Brien Press, I am delighted to reveal the cover of Ruth Francis Long's latest title, A Darkness At The End.  The final installment of the Dubh Linn fantasy trilogy, this title is published on 12th September 2016 and one lucky reader can get a first edition, hot off the press.*  To be in with a chance of winning this great prize, just enter via rafflecopter link at the end of the page.  Good Luck!

The final book in the contemporary fantasy trilogy set Dublin: and Dubh Linn, the fae world that exists in the cracks and corners of reality.
Angels, fae demons and humans are drawn into lethal conflict as the fate of the world hangs in the balance in the final installment in this urban fantasy. Holly, the fae matriarch, tries to sieze the power of heaven for herself, while Izzy has lost her memory and Jinx is dead ... or is he?
Confronted with ancient powers, sacrifice and treachery. War is looming within the ranks of the Sidhe. The angels and the demons begin to draw lines, daring each other to transgress and start another war ...
'fantasy lovers will adore the twists and turns … it’s wonderful to see Irish mythology in the hands of someone who knows what they’re talking about and resists presenting the reader with a twee view of the country' Inis Magazine about A Crack in Everything

Ruth Frances Long writes dark young adult fantasy, often about scary fairies, such as The Treachery of Beautiful Things, A Crack in Everything, A Hollow in the Hills and the forthcoming A Darkness at the End. (O’Brien Press, 2016). As R. F. Long, she also writes fantasy and paranormal romance.

She lives in Wicklow and works in a specialized library of rare, unusual & occasionally crazy books. But they don’t talk to her that often.
In 2015 she won the European Science Fiction Society Spirit of Dedication Award for Best Author of Children’s Science Fiction and Fantasy.


A Darkness At The End will be published by O'Brien Press on 12th September 2016 and will be available in PB and ebook format.  Ruth's other titles are currently available in all good bookshops and via amazon links below:

* Please note that winner will receive their prize in Aug, straight from the printers :)

a Rafflecopter giveaway
Posted by bleachhouselibrary at 04:13