"The Things I Should Have Told You" by Carmel Harrington. Review and Giveaway. 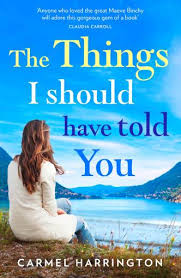 To celebrate the launch of  Carmel Harrington's latest novel, The Things I Should Have Told You, Harper Collins in Ireland have kindly donated three signed copies for me to giveaway to readers.  To be in with a chance of winning one, just enter via rafflecopter link below.  Good Luck Everyone!

The Guinness family is struggling to stay united.  Mae and Olly have lost the love in their marriage, their thirteen-year-old daughter is in hospital after drinking herself into oblivion and elderly Pops is fading away at a rapid rate.  Tensions within the family unit are at an all-time high and Mae is edging toward surrender.  Pops has something else in mind for his son, his wife and their two kids.  He arranges an epic road trip for the family in an attempt to help them to re-connect.  But can the close- quarters of a camper van travelling through Europe really be the answer to their problems, or could it be the breaking of them altogether? 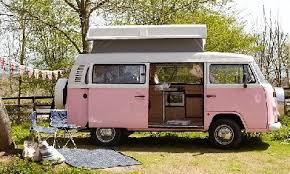 Wexford writer, Carmel Harrington has put her heart and soul into this novel.  The importance of family becomes obvious from the very first page and the ups and downs within a family unit are not hidden.  Mae is now the sole breadwinner of the Guinness family and Olly is not coping with unemployment as easily as he would like.  He feels that he has lost a large piece of himself and his marriage is suffering.  Mae is finding it hard to surrender her role as the homemaker and the one that her kids turn to.  When Evie is hospitalized, she feels the burden of guilt but is happy to snipe away at her husband in an attempt to shift blame.  Seven-year-old Jamie is too young to notice the bitterness but Grandpa Pop has seen everything.  His final gift to the family is a powerful one.  One camper van, one disjointed and grieving family, ten countries in eight weeks.  There are ferry trips, campsites with varying levels of comfort, miles and miles of road to cover and pre-arranged surprises from Pops.  All this with two kids and no internet.  Interesting times. 4805 miles are travelled, ten countries in eight weeks and a whole host of 'issues'. 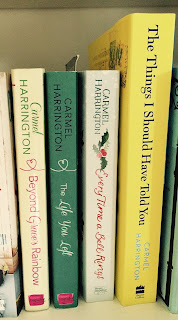 This is a story of a fractured family, a disjointed marriage and a last-ditch attempt at finding what they used to have.  Is staying together for the sake of the kids really the answer? Can discovering areas of Europe help the Guinness family re-connect?  Over the miles there are plenty of tears, tantrums and tensions.  But there are also moments of laughter, adventure and re-connection.  But is it too late?

No family is perfect and this book balances emotions cleverly throughout.  Mae and Olly could be any couple in Ireland who have been affected by the downturn in the economy. Pops is a wonderful character that lingers long after the journey has ended.  This is a novel that you can really escape into, ignoring your own family dramas, and travel the roads of Europe alongside a family you are not related to.  Win, Win!  Female fiction that is perfect for fans of Emma Hannigan, Claudia Carroll and Cathy Kelly.

The Things I Should Have Told You is published on 8th September by Harper Collins.  You can pre-order via amazon link below: