"The Drowning Child" by Alex Barclay. Author Q&A and Giveaway. 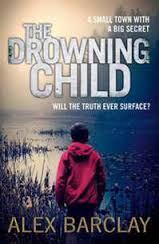 Thanks to Harper Collins in Ireland I have five copies of Alex Barclay's latest Special Agent Ren Bryce novel, The Drowning Child, to giveaway.  To be in with a chance of winning one, just enyter via the rafflecopter link below.  Good Luck!

The heart-stopping new thriller in the Ren Bryce series by Alex Barclay, bestselling author of DARKHOUSE and KILLING WAYS.
When Special Agent Ren Bryce is called to Tate, Oregon to investigate the disappearance of twelve-year-old Caleb Veir, she finds a town already in mourning.
Two other young boys have died recently, although in very different circumstances. As Ren digs deeper, she discovers that all is not as it seems in the Veir household – and that Tate a small town with a big secret.
Can Ren uncover the truth before more children are harmed?

The Drowning Child is the sixth book in the Agent Ren Bryce series. Can you tell us a bit about Ren and how she found a place in your imagination?

Ren is an FBI agent working with a violent crime squad – The Rocky Mountain Safe Streets Task Force in Denver, Colorado. Ren’s bright, funny, bipolar and all that comes with that. I created Ren because I wanted to write about the FBI, and feature an agent who automatically had extra dramatic potential. She has traits that are two sides of the same coin, so can benefit or scupper someone in a high-stress work environment. Is she fearless or reckless, dedicated or obsessed, justifiably wary or paranoid…

Setting your books so far away from Ireland is a brave move. How much harder does it make research?

I actually knew more about U.S. law enforcement than I did about Irish, having spent so long reading U.S. crime fiction growing up. It was a version of writing about what you know. I’ve visited most of the locations Ren has worked in, and met most of the type of experts who feature in the books. With email contact and phone calls, it’s never too hard to get the answers I need from the right people. I’m very lucky they are all so generous with their time and knowledge.

Crimes against children are a feature in many of your novels. Why is this?

It breaks my heart that there are monsters out there who hurt children. I have a horror of hearing how they can excuse their crimes or twist the reality to either lessen their involvement or lessen what they see as the impact on the victim. These kind of criminals think their crimes have an end point, when they cause immeasurable lasting damage. It’s so disturbing how someone can think this way, and it’s interesting to explore on a psychological level. In crime fiction, when a crime is committed against a child, it has a powerful impact on the investigators, and this raises the stakes, heightens the intensity, and creates more urgency, which drives the plot forward.

Ren’s character really develops with each book. Does she hover around in your head even when you are not writing about her?

Yes, she does. Ren is like a friend. I can see everything through her eyes so easily that writing her dialogue and thoughts in particular are the easiest part of writing the books for me. She gives me a laugh too, which is important!

You obviously have access to the routines and procedures of the FBI. How did this come about?

I mentioned to another writer that I needed to talk to an FBI agent for my next book, and he introduced me to one, who put me in touch with the main FBI office in Denver. The agent I was dealing with there told me about the Safe Streets task force, and I spent time with them, which was fantastic. The agent who I deal with for all the Ren books is the equivalent of Ren’s boss. When I started writing Killing Ways, I told him that Ren was really off the rails in this one, and he said, “You know I think Ren is always out of control.”

Do you think Ren is typical of a woman working in a predominately male dominated role?

I always just wanted Ren to be herself. She doesn’t do anything differently because she’s a woman and her colleagues are mostly male. But, every now and then, I love introducing her to the kind of man who thinks he can patronise the lil’ lady.

Ren’s relationship with alcohol is addressed from the very first chapter of the first book in the series.  Was that to show a vulnerable side to her or just a way of adding depth to her character?

In Blood Runs Cold, I wanted a dramatic opening that would highlight the striking difference between the two female agents who feature: Ren Bryce, and Jean Transom. Jean, for me, is the more traditional and earnest FBI agent, whereas Ren, yes… is passed out on her bathroom floor after a massive bender, and wakes up to have a huge row with her boyfriend. Ren is a woman of extremes – I wanted to kick the story off with a bang. Her relationship with alcohol operates on the following loop: love, denial of the love, fear of the love, rekindling of the love, fear of the effects of the love, rejection of the love, rekindling of the love…
This is her first scene in The Drowning Child – she’s in a bar where she knows that – on a previous case – a victim was picked up by a serial killer.
Special Agent Ren Bryce was sitting in Manny’s Bar on 38th and Walnut in Denver.
It has been six months since my last alcoholic beverage.
She was five beers down.
Until tonight.

If Ren had a playlist, what songs would feature?

Well, it’s going to be eclectic…

Kiss Me I’m #1@*faced by Dropkick Murphys
The Bomb by Pigeon John
I Fink U Freeky by Die Antwoord
Burn This Town by Battleme
Black Skinhead by Kanye West
I Drink by Mary Gauthier
Nobody’s Crying by Patty Griffin
Mr. Shiny Cadillackness by Clutch
Uprising by Muse
Black T-shirt by Rod Picott
Come Join The Murder by The White Buffalo & The Forest Rangers
Let Me Blow Ya Mind (feat. Gwen Stefani) by Eve
Crucify Your Mind by Sixto Rodriguez
Starlight by Muse
Done by Frazey Ford
Take Me To Church by Hozier
This Night by Black Lab
Nicotine Love by Tricky
Candy Shop by 50 Cent
Shut Up and Dance by Walk The Moon
Drink You Sober by Bitter:Sweet

There is a strong presence of Irish crime writers on the bestseller lists.  Do you get a chance to read many crime novels these days or do you prefer to read other genres when in writing mode?

It’s fantastic that so many Irish crime writers are up there! For various reasons, I haven’t read as much crime fiction as I would have liked in the past year, but I did read and love the superb Little Bones by Sam Blake – Cat Connolly is a heroine I want to hang out with. Along with crime novels, I like literary fiction, and non-fiction books on psychology/crime.

Alex Barclay lives in County Cork, Ireland. She is the bestselling author of Darkhouse and The Caller, as well as the Ren Bryce series.
For more information about Alex and her books, visit www.alexbarclay.co.uk
You can also follow Alex Barclay on twitter @alexbarcs.

The Drowning Child is published in TPB by Harper Collins Ireland and you can order your copy with Free delivery in Ireland and UK, from Easons.ie.