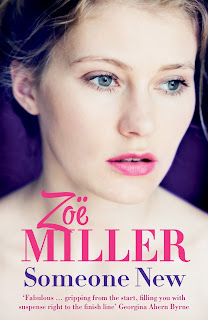 Thanks to Hachette Ireland and Zoe Miller for inviting me on the Blog Tour for Someone New.  I have a copy of the book to giveway to one lucky reader.  Just enter via rafflecopter link below.  Good Luck!

A suspenseful and sophisticated new novel from the author of A Question of Betrayal and A Husband's Confession, perfect for fans of Lesley Pearce.
Someone New
by Zoë Miller

In her heart, Grace knows the perfect, reliable, good-looking Gavin isn’t right for her. Then she meets Danny. Unpredictable and spontaneous, he turns her world upside down. All of a sudden, Grace is seeing life differently and doing things she never thought she’d do.
But tragedy strikes when Danny dies in a motorbike accident, shattering Grace’s world. As she struggles to come to terms with her loss, she becomes more and more convinced that she’s being followed – sighting a motorbike exactly like Danny’s everywhere she goes. And she starts to wonder if Danny’s death was really an accident.
When she finally voices her suspicions to her family and the police, though, no one seems willing to believe her.
Meanwhile Grace feels ever more under threat as sinister things begin happening to her. What was Danny hiding from her?  And what kind of danger is she in now? 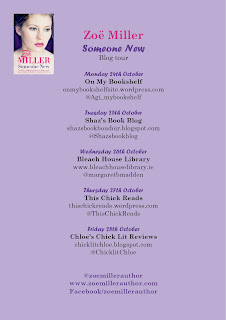 I’d like to say a huge thank you to Margaret Madden for featuring Day 3 of the Someone New blog tour as a guest post on her blog, Bleach House Library.  Today it’s all about the importance of secondary characters and what they can bring to the story.

I usually write my stories in the third person as opposed to first person. It means I am telling the story through more than one pair of eyes. There are advantages and disadvantages to both forms. First person means the story is told on a more immediate and intimate basis, and can feel very natural, which in turn can be very compelling to both write and read, but you are restricted to writing the novel from only one person’s point of view. I find I prefer to use two or three different viewpoints in which to explore every dimension of the story and turn the spotlight onto all aspects of the character. These viewpoints also help to give the reader a more rounded sense of each person and to appreciate different sides of the story. You can switch from one person to another and from scene to scene in a way that racks up the tension. But no matter what style you choose, you do need to have one main protagonist, who touches everyone else to some degree and from whom most elements of the plot will develop and evolve.

In Someone New, the main character is a woman called Grace Bailey. Thirty years old, and as the novel opens, at odds with herself and her life, she was the person through whom I decided to tell the story, but in order to show different aspects to Grace and enlarge on various angles of the plot and broaden the scope of the narrative, I needed a secondary character, someone to act as a counter balance to Grace.

It was fun getting to know the kind of person Lucia was so that she could act as a contrast and bring out a different side to Grace.  Lucia evolved in my mind’s eyes a total foil to Grace, she appears to be everything Grace is not; brainy, highly organised, sparkling and brilliant, neat and petite in her figure and her clothes, running a successful career and the kind of house that fully reflects that success, besides being married to the rather wonderful Robert. Already we can see how having an older sister like this might have an effect on a younger sister’s life and the decisions she makes, before we’ve even got to any of the plot points.

The make-up and actions of secondary characters, when they are set side by side with the main character, can be a catalyst for drama and conflict in itself with the contrast between them and their divergent approach to life. They can also help in deepening our understanding of the main protagonist. They are not merely there to pad out a story but to play an important role in helping to enhance the plot and strengthen our engagement with the protagonist.

In Someone New, I enjoyed pitching Lucia and Grace together on the page. What I liked about them as sisters is that, although they are very different people, they were there for each other, particularly Lucia in the role of big sister to Grace when the bottom fell out of her world.  Although Lucia seems to be fully capable of micro-managing her life in an effortless fashion, underneath that perfect front we see a very human side to her as she reacts to her sister’s distress, feeling a sense of helplessness swamping her, the sight of Grace’s white face sending panic fluttering around her.

Secondary characters must develop in their own right, and Lucia is not featured in Someone New solely to heighten our understanding of Grace, but she has a story of her own to tell, because after we see the first glimpses of her as a vulnerable human, we soon discover there is more going on beneath the surface of that sparkling lifestyle than you might expect!

Thank you Margaret, for having me on your blog!
Zoë xx

About Someone New
In her heart, Grace knows the perfect, reliable, good-looking Gavin isn’t right for her. Then she meets Danny. Unpredictable and spontaneous, he turns her world upside down. All of a sudden, Grace is seeing life differently and doing things she never thought she’d do.

But tragedy strikes when Danny dies in a motorbike accident, shattering Grace’s world. As she struggles to come to terms with her loss, she becomes more and more convinced that she’s being followed – sighting a motorbike exactly like Danny’s everywhere she goes. And she starts to wonder if Danny’s death was really an accident. 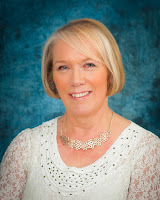 About the author
Zoë Miller was born in Dublin where she now lives with her husband. She began writing stories at an early age. Her writing career has also included freelance journalism and prize-winning short fiction. She has three children.
Her previous novels include A Question of Betrayal, The Compromise, A Family Scandal and Rival Passions.

Someone New is published by Hachette Ireland and is available in TPB and ebook format.  You can order your copy, with 12% discount and Free Worldwide Postage, HERE.  The ebook can be ordered via amazon link below:

a Rafflecopter giveaway
Posted by bleachhouselibrary at 23:53