The Girl on the Train: Fiction to Film.

Thanks to writing.ie for inviting me to review the film adaptation of Paula Hawkin's bestselling novel The Girl on the Train.  This article originally appeared in the stage & Screen review section of writing.ie.

The Girl On The Train: Fiction to Film 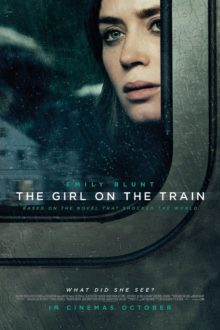 I was one of the lucky reviewers to read The Girl on the Train pre-publication and knew within three chapters that it was going to be a huge success.  Paula Hawkins used an unreliable narrator to draw us in to the hazy alcohol-fuelled lives of three women in a London suburb and the many twists and turns were dizzying and addictive.  You can read my original review here.
Last week I was invited along for Writing.ie to an advanced screening of the  film adaptation, starring Emily Blunt.  I had been impressed by the trailer and was really looking forward to seeing the book on the big screen.  However, within five minutes I knew I was going to be disappointed.  Firstly, London had been replaced with a New York suburb and rather than Rachel gazing out the window of her commuter train at a tightly packed neighbourhood, she is staring at the beautiful rear lawns of rather large detached houses, with not a blimp on the landscape.  Realistically she would not be able to see the faces of the people she watches, or indeed garner any insight into their lives.  Herein lies the problem, as the whole book (and indeed, movie) is based on the voyeuristic scenes from the start.
Then there is the casting.  While Emily Blunt is fantastic as Rachel, with her bloodshot eyes and perfect drunken slur, her supporting cast are dire.  Rachel’s ex-husband is played by Justin Theroux who manages to make a pretty good argument for why men should NEVER dye their hair.  I spent the whole movie staring at his ridiculously coloured tresses and finding his whole performance wooden and embarrassing.   Missing girl, Megan, is played by Hayley Bennett who manages to make a supposedly sexy young woman looked like a deranged girl playing a part in an adult home movie.  Her husband is meant to be a control freak that she cannot escape from, but instead the viewers are shown many angles of his buff body and treated to his blank facial expressions.  There is no character development and actor, Luke Evans, completely misses the pivotal personality the role required to do this film justice.  Things just continue to slide downwards as we are introduced to Anna, the woman who stole Rachel’s husband and life.  She is played by Rebecca Ferguson and the director chose to transform her appearance to one of complete beige-ness.  Beige hair, beige complexion, beige clothes and an irritatingly beige personality.  So bland that she actually blends into the walls.  A new mum, who does nothing yet requires a nanny, she is another wasted storyline who never gets a chance.
Thankfully, Emily Blunt manages to hold the bare bones of the movie together, but with all the strong female characters that had been present in the 2015 book, how did the director, Tate Taylor, manage to get everything so wrong?  Continuity is a serious issue throughout, scenes switching with major flaws and obvious errors.  The whole thing is a mess.  The soundtrack is too loud and jarring, the sex scenes full of misogyny and gratuitous shots of Megan’s ass.  The domestic violence is brushed over with barely a thought and the women are never given the chance to unfold.
My gut feeling is that due to the popularity of the book, some film executive decided to cash in on the domestic-noir trend at break-neck speed and commissioned a screenplay that was rushed to production without much thought.  The choice of director seems ill-advised and I would suggest that a female one may have added some substance to the weak script.  In saying all this, I have no doubt that this will be a huge blockbuster, drawing in all the fans of the original book and fans of the genre.  But, in my opinion, this is a classic case of why you should never judge a good book by its movie.  Not recommended.
(c)  Margaret Bonass Madden
Posted by bleachhouselibrary at 10:54

Email ThisBlogThis!Share to TwitterShare to FacebookShare to Pinterest
Labels: Film review, The Girl on the Train