Book Review - 'The Last One' by Alexandra Oliva. 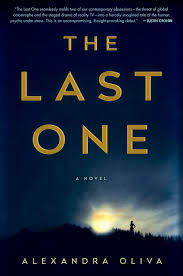 In The Dark is a reality survival show that pushes its contestants to the limits.  The prize money is high but some are competing for more than the cash.  Zoo is running from her own reality and thinks the show may give her a new perspective.  Things start to go terribly wrong and one by one the contestants dwindle. But where are the crew and supplies, and is the whole world watching Zoo with admiration or horror as she battles the elements?

This is such a clever novel.  While the characters are given unusual names (and this takes a bit of getting used to) the concept is taught and as the game begins, the reader is right there alongside its participants. Zoo is a tough cookie, despite her slight appearance.  She has an inner-determination that sees her holding her own against some of the tough guys.  She soon gains some respect and the group begins to divide.  Online comments are dotted through the start of the book and its easy to relate to how the viewers feel about the reality show and its stars.  When obvious cameras begin to disappear, Zoo finds herself battling the elements with just her mini-cam and starts to suffer from paranoia.  Can she survive through to the bitter end? Is it really worth it?

The over-all mood of Oliva's debut is one of tension and determination. Zoo is a strong character and the concept is even stronger.  It takes a few chapters to get really into the story, and the character names do not help this, but it is WELL worth persevering with it.  Once the games begin and challenges are set for the players, individual personalities come to light and clashes appear.  The woodlands have a personality of their own and the camera crew cannot interfere. Days slip into night and sleep is restricted.  The desire for food is intense and inner-survival skills become worth more than anything else.  The pace is choppy, with bursts of intense thrills and dips back to a steadier feel. The story line shifts about two thirds through and the protagonist takes on a more intense role.  I thoroughly enjoyed The Last One.  I had no idea what I was about to read and enjoyed the journey all the more for it.  A cross between Black Mirror and Survivor, with a great feisty, female lead.
A whip-cracking debut that I can highly recommend.

The Last One is published by Penguin Michael Joseph in HB and Ebook and is released in PB on 29th December 2016.
You can order your copy, with 12% discount and Free Worldwide Postage,HERE.  The ebook can be ordered via amazon link below:


I received a copy of this title, from https://www.lovereading.co.uk/ in return for an honest review.
Posted by bleachhouselibrary at 08:48