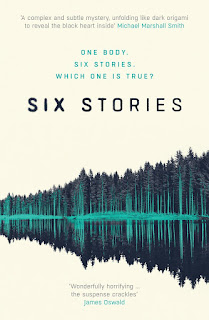 Thanks to Orenda Books for including me on the blog tour for Six Stories. Their titles always excite me and have yet to disappoint...

Scarclaw Fell, England, 1997. The body of fifteen-year-old Tom Jeffries is found after his disappearance from a camping lodge a year earlier. The cause of death is officially recorded as misadventure and the case is closed.
Twenty years later, a serialised podcast brings the case back to life by interviewing the friends of Tom, who were there that fatal night. Over six episodes, journalist Scott King delves deep into the memories from six different perspectives and leaves his listeners to draw their own conclusions... 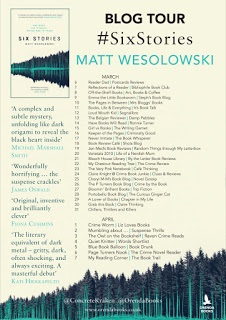 This is a murder mystery with a twist. By using the concept of transcribed podcasts the author draws the reader in; minute by minute; hour by hour. A close-knit group of friends travel together regularly, to the marshy area known as Scarclaw, supervised by some of their parents. The dynamic usually changes when a new member is added to the group, not always for the better, but each child looks forward to their time in the isolated cabin and the opportunities the trips provide. All that changes when Tom disappears in the middle of the night. The group break all ties and the property is sold. When the podcast airs, the individual stories of each group member shed a new light on the death of the teenager and the questions bring back some uncomfortable memories. Six teenagers; six stories; multiple viewpoints. But which one is real?

This debut is an addictive and compelling read with multiple layers. There are elements of suspense, fear, uncertainty and heart-pounding thrills. The unusual technique employed by Wesolowski is right on-trend, with nods to ground-breaking podcasts like Serial and TV documentaries like Making A Murderer and Amanda Knox. The search for the truth has gone beyond traditional police work and investigative journalism. Now the public want to feel part of the investigation; wanting more and more access to witnesses and documentation surrounding these mysteries. The days of Cagney and Lacey are a distant memory. This novel is sharp as a butchers knife, cutting straight through to the nerve of its reader. A read-in-one-sitting experience that will surely inspire many authors to explore new methods of narration. Highly Recommended. 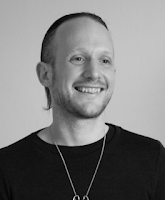 Matt Wesolowski is an author from Newcastle-Upon-Tyne in the UK. He is an English tutor and leads Cuckoo Young Writers creative writing workshops for young people in association with New Writing North.


Wesolowski started his writing career in horror and his short horror fiction has been published in numerous magazines and US anthologies.


Wesolowski's debut novella ‘The Black Land‘ a horror set on the Northumberland coast, was published in 2013 by Blood Bound Books and his latest horror novella set in the forests of Sweden is available in 'Dimension 6' magazine through Coeur De Lion Publishing.
Wesolowski was a winner of the Pitch Perfect competition at 'Bloody Scotland'; Crime Writing Festival 2015. He is currently working on his second crime novel, Ashes, which involves black metal and Icelandic sorcery.

Six Stories is published by Orenda Books and is available in PB and ebook format. You can get your copy at all good bookshops or via amazon link below: