'Our Little Secret' by Claudia Carroll. Exclusive Excerpt and Giveaway.

Exclusive Excerpt* from Our Little Secret by Claudia Carroll. 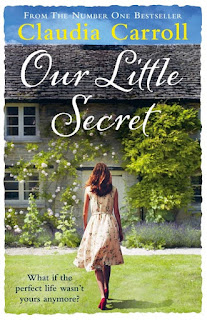 I am extremely honoured to be the first to share an excerpt from Claudia Carroll's latest novel, Our Little Secret, which is published on 23rd March. I also have three copies of the novel to giveaway. Just enter via rafflecopter link at the end of the page. The giveaway is open INT. I hope you enjoy this sneak-peek and best of luck to all who enter the giveaway.

*please note that any change of formatting is due to Bleach House Library and is not reflective of the final product.

A sparkling story about what happens when you let someone into your life… but they turn out to want more than you’d bargained for! 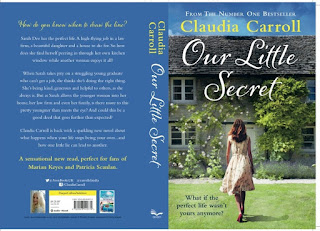 Sarah has the perfect life. A high-flying job in a law firm, a beautiful daughter and a house to die for. So how does she find herself looking in through the kitchen window while another woman enjoys it all?

When Sarah takes pity on a struggling young graduate who can’t get a job, she thinks she’s doing the right thing. She’s being kind, generous and helpful to others, as she always is. But as Sarah allows the younger woman into her home, her law firm and even her family, is there more to this pretty youngster than meets the eye? And could this be a good deed that goes further than expected?
Claudia Carroll does it again with a sparkling new novel about what happens when your life becomes up for grabs…

With a slow, sickening sense of horror, Sarah found herself
peering through the darkness of night, right into her own
living room window. And there it was for all to see – the
happy family tableau that was playing out inside, picture
perfect in every way.
The roaring log fire? Tick.
The glasses of wine served out of the good crystal? Her
good crystal goblets that had been a wedding present, thanks
very much. Tick.
The whole scene looked like something out of an Ikea
catalogue, right down to the daintily laid out plates of
bruschetta and picky dippy things artfully dotted around
the coffee table.
To Sarah’s astonishment, both her ex-husband and her
daughter had completely abandoned TV, iPhones and iPads
and were actually playing Monopoly. (Christ, Monopoly
. . . seriously?) All while she looked on, smiling happily and
carefully noting down the score while the three of them
laughed and joked, everyone in high spirits.
Just look at you, Sarah thought, as she stood in her own
front garden, her eyes burning into the back of the woman
she still thought of as her friend.

I’ve just been warned about you. I’ve been told you won’t
stop till you’re actually living my life.
But by the looks of it, you already are.

Did it all start such a very short time ago? Has it really
only been a year since I could call my life my own?
Here, for what it’s worth, is how it all began. With a
simple manicure on my lunch break, in the middle of a
day, when I was stressed out of my mind. All I wanted was
a snatched half-hour of time out, before heading back into
the manic whirl of the Sloan Curtis offices. Nothing more.
But if I’d known then what I know now, then trust me,
I’d have been a very distant speck on the horizon.

Sarah
‘You have very good cuticles. Badly neglected though, I’m
afraid. They just need a little bit of work,’ my beauty
therapist said, her head of thick, glossy dark hair bend low
over the nail station, uttered focused on her work.
‘I’m afraid I don’t get a huge amount of time to take
care of myself.’ I smiled politely, flicking though that
month’s Vanity Fair with my other hand. There was an
article about Kate Middleton’s mother that I remember
particularly wanting to read, for no other reason than to
valet park my brain for the next half-hour. Exactly what I
needed after that morning’s conversation/screaming match
with Darcy, my teenage daughter. Not to mention the snippy
tone my boss had taken with me in a meeting earlier that
day to discuss a legal brief I wasn’t quite up to speed on.
At least not yet, I wasn’t.
A little half-hour of pampering on a Friday lunchtime
before the weekend, that’s all I was after. Something I hadn’t
indulged in for years. In fact I think the last time I spent
a bit of non-essential cash on myself was long before Darcy
hit secondary school.
‘But it’s so important to make time for personal grooming,’
Lauren, my therapist, gently insisted with a sweet smile.
‘These little things matter. My mother always used to say
you can tell anything you want about a person just by looking
at the state of their nail bed.’
‘Yes, yes, of course,’ I chimed automatically, completely
absorbed by the article in front of me. Jesus, had Carole
Middleton really made £30 million by the time she’d turned
forty? And all from flogging little party bags? What was
wrong with me anyway? Why couldn’t I come up with a
home-based cottage industry like that, which would go on
to dominate the Forbes index and put an end to all of my
money worries?
‘Will you be taking any holidays soon?’ my therapist
asked, interrupting my thoughts yet again. Oh God, I
groaned inwardly. Do we really have to have the holiday
chat? Couldn’t this one sense I just wanted to pull a Greta
Garbo and be left alone to my thoughts?
‘I wish. I can’t remember the last time I took a proper
holiday,’ I replied, flashing her a quick smile.
‘Going out tonight, maybe?’
‘No, just back to the office shortly to catch up with a
few things I need to sign off on, I’m afraid.’
‘And any plans for the weekend?’
Not unless you count frantically playing catch-up with work,
bickering with Darcy and trying my level best to be civil to
Tom when he comes over to collect her later on, then no, I
thought. As it happens, I was plan-free right through till the
following Monday morning. If I was very lucky I might get
to see an episode of House of Cards that I hadn’t seen before
on Netflix and maybe, just maybe, I might even chance a
sneaky glass of Pinot Grigio when I had the house to myself.
As you could see, it was set be another wild weekend in
the life of Sarah Keyes.
‘No, just a quiet one for me.’
‘Say no more,’ Lauren smiled very sweetly. ‘I get it. A
romantic Friday night in with your husband, am I right?’
‘A romantic night in with who?’ I asked, looking up at
her, confused.
‘Your husband,’ she said, two chocolate-brown eyes
blinking innocently back at me.
‘I’m not married,’ I replied, just a bit too quickly. ‘At
least, not any more I’m not.’
‘Oh, I’m so sorry, me and my big mouth,’ Lauren said,
blushing very prettily as she rubbed a dollop of cuticle
cream in. ‘It’s just that you’re wearing a wedding ring, so I
assumed—’
‘Separated.’
‘Ahh,’ she said, nodding. ‘I see. Do you have children?’
‘Just one. Darcy. She’s sixteen.’
‘I’m sure she’s a wonderful girl,’ Lauren said diplomatically.


Thought about her, and wondered.

Thanks to Harper Collins in Ireland for letting me share this excerpt, and for the giveaway. I hope you all enjoyed the teaser. Our Little Secret is published in TPB on 23rd March 2017.

a Rafflecopter giveaway
Posted by bleachhouselibrary at 08:11