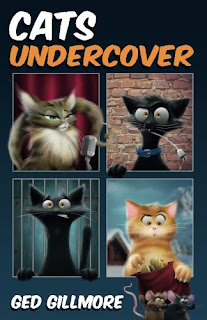 We received a copy of this title, from the author, for review purposes.

This is the hilarious sequel to Cats On The Run by Ged Gillmore. It is about three cats named Ginger, Tuck and Minnie, who live a fairly happy life on an abandoned farm called Dingleberry Bottom which is bordered by a great, dark forest called (funnily enough) the Great Dark Forest. Ginger's role is to take care of food supplies for winter and also for daily use. Tuck helps his two friends, despite being a massive scaredy-cat. As for Minnie, well she really just sits around and does nothing but watch her favourite TV show, Kitten's Got Talent. Ginger starts to notice the food stocks decreasing and suspects Minnie of stealing food. But it's not Minnie. Ginger soon finds the real thief and follows them to get what is rightfully hers (and Tuck's and Minnie's, technically).

While this is happening, Minnie gets news that she is going to audition for Kitten's Got Talent. She sets off without considering the fact that she has no money for transport. And poor Tuck is left by himself. And so, being the scaredy-cat that he is, goes off to search for his friends. He gets lost along the way and ends up in the place of his nightmares; The Dark Forest. As if things couldn't get worse, he gets captured by a pair of humans who plan to turn him, and other cats, into a a fur coat! Will the three cats get reunited and achieve whatever goals they had at first?

Cats. It just had to be cats. It couldn't have been dogs? I hate cats. But the animal choice evidently didn't affect my opinion of the book as it is one of the funniest books I have read since Skulduggery Pleasant. But maybe the author would write some books about dogs? *Nudge, Nudge* Just kidding. The book is absolutely pun-derful. The sheer pun-tasticness of it made it a very enjoyable read. I recommend this for ages 8+.


Ged Gillmore was born slap-bang in the middle of England and spent his formative years there before moving to London and trying to sound posh. But he failed miserably and after 18 years in the capital he moved to Sydney. 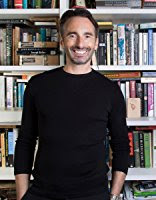 When he's not falling off his surfboard at Bondi or dabbling with a day job which pays the bills he sits at his laptop and bashes out fiction. He frowns while writing his crime fiction series about an English criminal forced to become a private investigator (it's fiction - honest!), but laughs his head off when he's working on his children's chapter book series starring Nip & Tuck, his two cats. Sometimes Nip & Tuck sit on his laptop and he loses a day's work...
Cats On The Run, the first book in the hilarious Tuck & Ginger series, was written for friends as a distraction while Ged was working on his first crime thriller. After being pestered by multiple parents to turn it into a book Ged did just that and it was published in mid-2015 and distributed via Scholastic Australia. Ged has been thrilled with the reaction to the book and enjoys touring schools in Sydney and introducing school children to his laugh-out loud fiction. The much-anticipated sequel, Cats Undercover, launches in early 2017 and promises to take the craziness up a notch.
And of course work continues on Ged's crime series, which follows the lovable English rogue Murdoch as he tries to adapt to a new life in Australia and leave his criminal tendencies behind. Murdoch's dangerous past is never far behind and certain shady characters are hell bent on seeking their revenge in his little piece of paradise.
Ged will release this gripping three-part crime noir series in September 2017. Stay tuned!

Cats Undercover is available in paperback and ebook format. You can order your copy via the amazon link below: