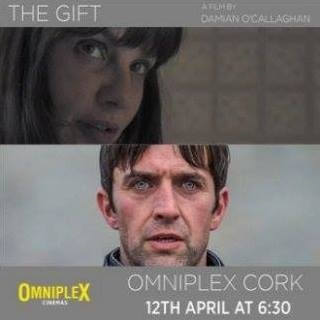 
A year after losing his wife to cancer, Sean (Alan Devin, Veronica Guerin) is consumed by grief.  His teaching job has lost its appeal, his rent is overdue and he is avoiding contact with his friends and family. Without Sarah (Una Kavanagh, Fair City) he has nothing left to live for and decides to end it all. Putting his whiskey bottle aside, he begins to plan his own death. However, it is not as simple as he thought. As he thinks through the potential methods, the realities of dying become crystal clear.  It will not be a pleasant task and there are a few barriers in his way.

Set in Killarney, the opening scenes of The Gift are breath-taking. Director, Damian O’Callaghan, uses stunning aerial shots which sweep across the landscape and show the magical beauty of Co. Kerry. The soundtrack is raw; literally tugging at strings; haunting cello combined with pizzicato overtones; matching the barren scenery perfectly. Sean’s mood is haunted and his eyes are almost a character in themselves.  While he roams the quiet roads of Killarney, his appearance matches the dreary weather and solemnness of the surrounding fields. Flashbacks are used to reveal the depth of his grief and the memories are a no-holds-barred look at how cancer took a part of Sean along with Sarah. 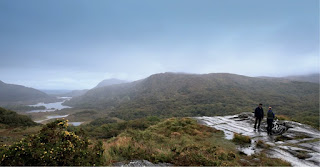 The story is poignant, with Sarah’s death ever-present and the young widower sinking further and further into the depths of his grief, but there are comical moments that lift the story to a new level. A half-hearted encounter with a local barmaid; a well-meant pep-talk from his landlord and friend; a spontaneous decision to buy a length of rope from the local hardware shop. The dark humour is subtle yet effective.  The interactions with the locals show how a small community can rally around, quietly, and really make a difference.  Shop assistant, Jane (Dawn Bradfield, The Clinic), adds some colour to the scenes, with her witty retorts and frank approach to depression. There is a superb cameo performance from Brendan Grace, who ditches his Bottler alter-ego and shows that he is a truly talented actor.

Make no mistake, this is a sad story; but it is an honest look at grief, depression and loneliness. It carries the message that there are good days; bad days and days in-between. The darkness can be broken by moments of brightness; and sometimes that brightness can be found in the most unexpected places. The barren landscape of Killarney is utilised to maximum effect, the casting is perfect and the soundtrack ideally matched. A wonderfully warm and touching story which cleverly blends grief with black humour.