The Woman at 72 Derry Lane by Carmel Harrington. Exclusive Extract and Giveaway. 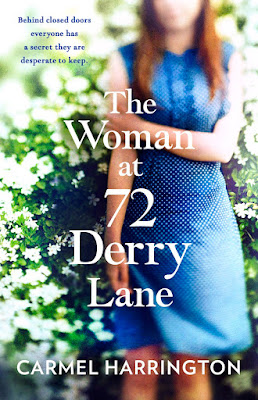 Thanks to Harper Collins, I have the pleasure of sharing a sneak-peek at the latest novel from Carmel Harrington, published on 15th June. There is also a chance to win one of two signed early editions of the book and a little extra prize (for twitter followers) of an A4-sized wooden wall plaque, which I thought captured the feeling of Carmel's novels perfectly.  Twitter winner will also receive a signed edition of the book.

To be in with a chance of winning The Woman at 72 Derry Lane, just enter via rafflecopter link below.  To enter twitter competition, see pinned tweet @margaretbmadden. Good Luck!

On a leafy suburban street in Dublin, beautiful, poised Stella Greene lives with her successful husband, Matt. The perfect couple in every way, Stella appears to have it all. Next door, at number 72 however, lives Rea Brady. Gruff, bad-tempered and rarely seen besides the twitching of her net curtains, rumour has it she’s lost it all…including her marbles if you believe the neighbourhood gossip.
But appearances can be deceiving and when Stella and Rea’s worlds collide they realise they have much in common. Both are trapped in a prison of their own making.
Has help been next door without them realising it?
With the warmth and wit of Maeve Binchy and the secrets and twists of Liane Moriarty, this is the utterly original and compelling new novel from Irish Times bestseller Carmel Harrington. 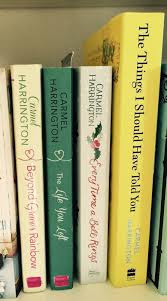 ‘Guaranteed to brighten your day’
Novelicious

‘A bittersweet, quietly brilliant novel that will make you cry, laugh and cry all over again’
Female First

‘It will stay with you, well after you have turned the last page’
Bleach House Library

Exclusive Extract from The Woman at 72 Derry Lane

Looking at the trees, Stella thought that maybe next door was her answer. Her gut, her every instinct told her that despite the gruff exterior, her neighbour, Rea, was a good person. It had to be her who called the Gardaí each time. That showed she cared, didn't it?

So, before she had a chance to talk herself out of it, she found herself knocking on her neighbour’s door.

'I was surprised to see you,' Rea said. 'A nice surprise, I might add, but one I wasn't expecting.'

Rea looked at Stella closely, taking in how agitated she seemed, her hands wringing in her lap. 'You have a look of someone with something on her mind. Spit it out.'

Stella nodded, then cleared her throat. 'Can I be frank with you?'

'I'd rather that. I've little or no patience for anyone who beats about the bush.'

Stella smiled, warming even more to this woman; while she was what many would call brusque, her eyes were kind. 'I should have practised what to say. Sometimes finding the right words is difficult.'

'When you get to my age, that's something that comes with the territory,' Rea smiled.

'First of all, please don't be offended by this question, but I need to ask it all the same,' Stella said, leaning in.

Rea brushed aside her apology, 'You don't know me, so I would think you have more questions than answers.'

Somehow even before she spoke, she knew the answer, 'Can I trust you? I need to be sure that you won't repeat this conversation to anyone.'

'When you say anyone, I assume you mean your husband?'

'You can say what you like here. Think of it as a confessional.'

'I gave up believing in God a long time ago,' Stella replied.

'I've a pretty up and down relationship with her myself too.'

Stella smiled, thinking that she liked that idea a lot and liked Rea even more.

'Well, leaving God and confessionals aside, would you take my word for it, that you can trust me?' Rea asked.

Stella felt her shoulders sag with relief, nodding. Her heartbeat accelerated so rapidly she thought it would jump out of her chest and bounce clear across the floor, right out the door.

'I want to leave him,' Stella said.

'Good for you.' Rea had never been so glad to hear a statement in her whole life. Maybe this one had more about her after all.

'Then why don't you? He's at work. You're not chained to the house. Just pack a bag and go.'

'He's clever. He's backed me into a corner. I need to sort some things out first before he ....'

Rea watched the girl before her tremble, unable to finish the statement. 'Before he hits you again?'

Stella nodded, looking so broken, lost and very alone, that it made Rea's stomach flip nervously for her.

'Matt has told me over and over that I'm all alone without him, that I'd not last a moment on my own. He's right about one of those things. I don't intend to prove the second.'

'You've got nobody?' Rea asked. When Stella nodded, Rea felt something give deep inside of her. The girl’s face looked so sorrowful and bereft and she recognised how that felt.

'I have family living in France. That's where I'll go,' Stella shifted her weight slightly, wincing in pain as she did.

'That bastard, how could a man do that to a woman, to anyone?'

'He's not a man when he loses his temper. He's an animal. And each time he loses it with me, less of the man I married remains. I'm afraid that soon they'll be none of him left.' Stella took a deep breath and continued, 'I know you don't know me. I know that me landing on your doorstep is a terrible imposition. But I'm desperate. I don't have anyone else to turn to.'

It took Rea all of a nano second to reply. 'Now stop that. I'm very happy you called in to me. What do you need? Because if it's in my power to give it to you, it's yours.'

Rea reached over to hold one of Stella's hands between her own. 'He seems to be losing his temper with you more frequently. The walls may be thick in these Victorian houses, but they are linked all the same, so noise travels....'

Stella felt her old friend shame come back to torment her. The embarrassment of knowing that the most horrific, dark, secret part of her life was silently witnessed by her neighbour was a difficult pill to swallow.  'Yes, you're right.'

'You've got to get out of that house sooner rather than later. Do you hear me?' Rea said, her voice rising in anger.

There was a time that Stella would have disagreed with this. But things were different now. She didn't plan on dithering. 'I know. It’s hard when you are in the middle of it, to see a way out. He's been chipping away at me for so long, I've forgotten who I am.'

'Well then, that's the first thing you have to work out. How to get back the Stella you were before he came into your life. As for being trapped, the only person who can hold you back, is you,' Rea said.

She stood up and walked to the door, saying, 'I better make some tea. A large pot too. I think we'll need it, to work through this mess. But work through it we will. Two heads are better than one.'

Rea stopped at the doorway and said to her, 'You were wrong about something else you know. You're not on your own. Not anymore.'