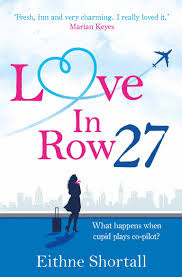 Airline check-in agent, Cora Hendricks, is the queen of match-making. With the help of online research, she sees potential mates and brings them together on board Aer Lingus short-haul routes. Row 27 has been earmarked by herself and her cabin-crew friend, Nancy; where the unsuspecting singles are seated together and given some on-board VIP treatment. Not all the matches are successful, but Cora and Nancy cross their fingers and wait for the magic to happen. Meanwhile, Cupid's arrow seems to have flown right past Cora and she despairs at ever meeting Mr. Right.

The search for the perfect summer read ends here. Eithne Shortall has written a wonderfully fun and uplifting tale, with Cora at its heart. Based in London Heathrow, the world of human interaction is temporarily restored when self-service and online check-in are suspended for a time. The days of queuing at an airline desk and chatting to the agent ceased back in the late 1990s and air travel lost a bit of its wonder. Staff become almost invisible and match-making opportunities were all but gone. By suspending passengers ability to ignore check-in, the story is given wings that would otherwise have been clipped. Cora's co-workers are a mixed bunch and the banter between all departments in the airport is just as real as it is in real-life. Ground crew; Cabin crew; baggage handlers; airport security; concession staff; they all work in the climate controlled, permanently busy airport. There is never a dull day and no two passengers are the same.

Cora's mother is suffering from early on-set dementia and has been placed in a care-facility. Visits can be difficult and memories are becoming harder and harder to grasp. Nancy is hoping for promotion and to be seen more than just the 'coffee or tea? girl. A host of other airline staff are ever-present and the new-found fame of one of the gang leads to some hilarious antics in front of a TV crew. As the passengers board flights, they are unaware of the bigger story.  Female fiction doesn't get much better than this. Love in Row 27 is a refreshing and rewarding read, definitely worth packing in your suitcase. Highly recommended.

Love in Row 27 is published by Corvus and is available in PB an ebook format. You can order your copy, with Free Worldwide Postage, HERE. The ebook can be ordered via amazon link below: