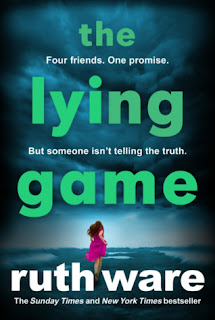 One text message. That is all it takes to dredge up the past. Isa knows something is terribly wrong when she receives a message from an old school friend. Throwing essentials into a bag, she grabs her baby daughter and boards the first train back to Salten, where Kate waits for her three best friends. "I need you" is all the message said, but the girls know she would not summon them without reason. Their boarding school days and The Lying Game come back to haunt them...

Ruth Ware thrilled readers with her previous novels, In a Dark, Dark Wood and The Woman In Cabin 10, and this one is just as sinister. Isa was late to the foursome, after joining their boarding school in fifth term. They soon find themselves embroiled in The Lying Game and ditching their dorms for the bohemian pull of Kate's home, situated in the isolated Reach area near their school. The house is accessed by trawling through marshy sands and the girls enjoy the freedom that Kate's father allows. They can drink, skinny dip and ignore all the usual restrictions afforded to teenagers. It is not too long before all the freedom catches up with the girls and they find themselves tangled up in a web of lies.

Now, many years later, Isa travels back to the Reach and the secrets it contains. Kate is cagey and the atmosphere is tense. The house is literally crumbling away and Kate seems broken. When human remains are discovered, the village of Salten is awash with rumour.  Isa struggles between fleeing back to London with her daughter, or staying to help herself and her three friends confront the past. The past refuses to stay buried, despite the girls best attempts:

"The memories are no longer gentle little 'do you remember?' taps on my shoulder, they are slaps, each one an assault. Even away from the crowd they keep coming."

The chapters fly along, dipping from the days of boarding school, back to the present day.  Isa's role as an attentive mother is juxtaposed against Kate's refusal to be responsible for anyone.

The Lying Game is a dark and multi-layered novel, with an eerie feel. It has the Gothic atmosphere of Bronte's Wuthering Heights, the slow-building and taut suspense of Apple Tree Yard and the tension of Alfred Hitchcock classic movies. A gentler pace than Ware's previous novels, but the thrills are subtle and effective.

The Lying Game is published by Harvill Secker and is available in HB and ebook format. You can order your copy, with 20% discount and Free Worldwide postage, HERE. The ebook can be ordered via amazon link below: